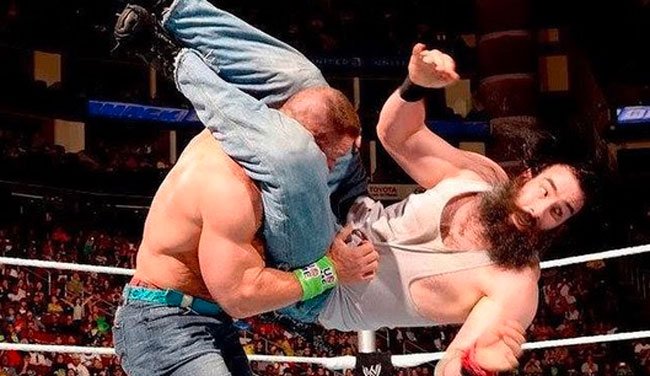 Wrestler Jon Huber (aka Brodie Lee, Luke Harper) has passed away, the news was confirmed by his wife.

The Christmas holiday’s are a happy moment for many but it has become a week to forget for some families.

First we heard the news of former bodybuilder and fitness entrepreneur, Sam Bakhtiar’s passing at the early age of 47.

Just a few days later, tit was revealed that former WWE wrestler Jon Huber passed away at the age of 41.

In her post, Mamanda said her husband died from a lung issue that was not related to COVID-19.

“My best friend died today. I never wanted to write out those words. My heart is broken. The world saw him as the amazing @brodielee (fka Luke Harper) but he was my best friend, my husband, and the greatest father you would ever meet. No words can express the love I feel or how broken I am right now. He passed surrounded by love ones after a hard fought battle with a non Covid related lung issue. The @mayoclinic is literally the best team of doctors and nurses in the world who surrounded me with constant love.
On top of that, I can’t express my love and admiration for the way @allelitewrestling has treated not only my husband but myself and my kids. @margaret.stalvey @meghalegalgirl10 @americannightmarecody @thebrandirhodes @nickjacksonyb @mattjackson13 @kennyomegamanx @tonyrkhan and the rest of the team at AEW have helped keep me standing and pick up all the broken pieces.
I’ve been surrounded by so much love and incredible people I can’t tag them all but they know who they are and I don’t think they will ever know how thankful I am for them.” Mamanda Huber

AEW released a statement calling Huber “exceptionally respected and beloved” throughout the industry.

“Jon’s love for his wife Amanda, and children Brodie and Nolan, was evident to all of us who were fortunate to spend time with him, and we send our love and support to his beautiful family, today and always,” the statement read. “Jon’s popularity among his peers and influence on the wrestling world was worldwide and transcended AEW, so this loss will be felt by many for a long time.

“We were privileged at AEW to call Jon Huber a brother, a friend and one of our own.”

The WWE also released a statement:

“WWE is saddened to learn that Jon Huber, known to WWE fans as Luke Harper, passed away today at age 41.

Known as both Luke Harper and Brodie Lee in the ring, Huber found success in every stop of his sports-entertainment career, as his soft spoken yet imposing presence helped him create countless awe-inspiring moments in the ring. After a highly decorated run on the independent circuit, Harper debuted in NXT as a menacing enforcer for The Wyatt Family. Harper had a dominant tag team run with Rowan that would lay the groundwork for future championship success.

As a member of The Wyatt Family, he engaged in heated rivalries with the likes of Kane, Daniel Bryan, The Shield, John Cena and The Usos. After being set free from the family, Harper authored an impressive singles run that culminated with him defeating Dolph Ziggler for the Intercontinental Championship. Harper & Rowan later comprised The Bludgeon Brothers and embarked on a path of destruction that was highlighted by a SmackDown Tag Team Title victory in a Triple Threat Match at WrestleMania 34.

WWE extends its condolences to Huber’s family, friends and fans.”

WWE legend, John Cena published a photo of him and Jon in action during one of their fights.

Evolutionofbodybuilding.net sends our deepest condolences to the family and friends of Jon Huber.