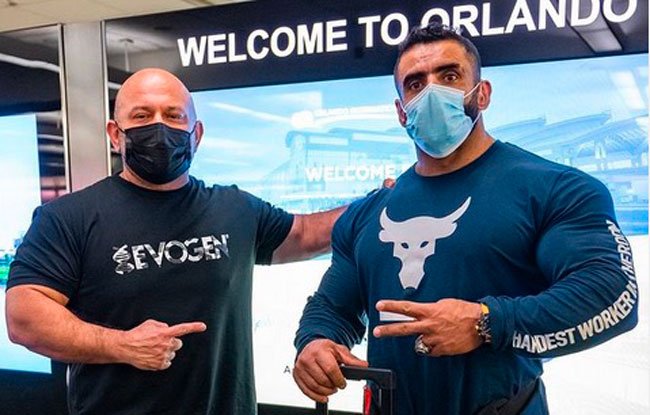 Hadi Choopan arrives in the USA in time for the Mr. Olympia.

Hadi Choopan has finally landed in the USA after so much speculation regarding his VISA.

The Iranian champion landed in Florida and was picked up by super coach Hany Rambod.

Hany will have his hands full preparing 7X Mr. Olympia Phil Heath and Hadi Choopan at the same time. Also he has Physique champion Andrei Deiu keep an eye on.

In recent days, after Roelly Winklaar confirmed he tested positive for Covid-19, the focus turned to Hadi Choopan.

As reported by Evolutionofbodybuilding.net 24hrs earlier, Hadi was on the verge of arriving in the USA, and he finally did.

The Olympia Weekend organizers will be relieved with this positive news after a number of star athletes pulled out from the event.

Choopan finished in a controversial third place at the 2019 Mr. Olympia. Some of the media and fans believed Choopan could have easily finished in second or even first.

The 2019 ‘People’s Champion’ will be a major threat to defending champion Brandon Curry and he can also shatter Phil Heath’s dreams of winning his eighth Olympia title.

Choopan is known for his shredded look and very good aesthetics, a combination that can easily win him a major event.

As the bodybuilding world is excited and relieved that Hadi will be competing at the Mr. Olympia, his fellow competitors will feel the added pressure.