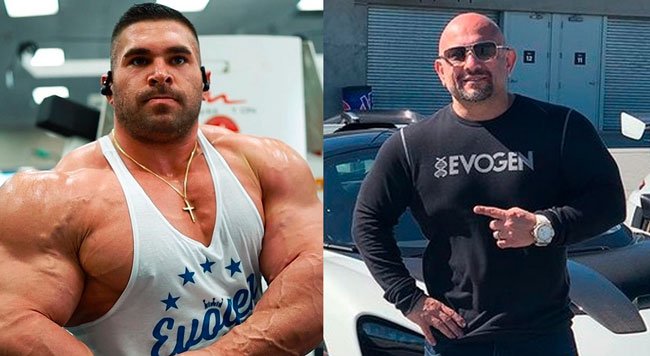 Hany Rambod is one of the best trainers/coach in the bodybuilding industry.

His resume is second to none when it comes to success and helping athletes become the best of the best.

With 19 Olympia titles under his best, including 7X Mr. Olympia Phil Heath, fan favorite Hadi Choopan and many others, Rambod will notice when an athlete has the potential to be the best.

Derek now joins a star studded team of athletes that have been dominating the bodybuilding industry for the past 10 years.

Derek is one of the newest stars in the bodybuilding world. After turning pro in 2016, Lunsford has not looked back as he has become one of the best athletes on the competition circuit.

After qualifying for the his first Mr. Olympia competition by winning the Tampa Pro show in 2017, Derek was one of the most talked about athletes in the 212 division.

Placing fifth at the Olympia in 2017, automatically qualified Derek for the 2018 Mr. Olympia. Derek would move up to second, missing out on the title by placing behind the legendary Flex Lewis.

Many believed the 2019 Olympia Weekend would be the year Derek wins the 212 title, but unfortunately he had to settle for second place again after the more experienced Kamal Elgargni.

When the 2020 Olympia Weekend arrived, Derek was expected to be one of the favorites to win the the title. Derek had to settle for fourth after Shaun Clarida won the title.

With automatic qualification for the 2021 Olympia Weekend, Derek has the entire year to prep for his fifth consecutive Olympia contest.

It can be said that Derek will again be one of the favorites to challenge Clarida for the 212 title. With Hany Rambod in his corner, bodybuilding fans can expect the best ever version of Derek to step on the Olympia stage in 2021.

Originally from Indiana, now living in Tampa Bay, FL Derek won the Overall title of Mr. USA to earn his IFBB pro card. Six days after earning his IFBB pro card Derek competed in the Tampa Bay IFBB Pro 212 which he won and earned his first qualification to go to the 2017 Olympia 212 competition. Derek is now knocking on the door of the Olympia 212 title which is his main goal.

“We’re very excited to have Derek join the team. Evogen has quickly become a globally recognized brand, and we want our team to really speak to that evolution by including athletes from around the world, and right here in the United States as well.” says Evogen Founder/CEO, Hany Rambod.

Derek is currently training for the 2021 Olympia 212 under the guidance of his new coach 19X Olympia winning coach Hany Rambod and Evogen team, follow him on social to track his progress as well as @EvogenNutrition profile.

When Rambod is not busy coaching many of the world’s elite, he serves as the CEO of Evogen Nutrition. Putting his Bachelors degree in Biology with an emphasis on Neurophysiology to good use, Evogen Nutrition has been experiencing rapidly growing popularity.

All of its formulations were created for Rambod’s elite athlete roster, and only in the past few years have they been made available to the public. Rambod prides himself on bringing only quality innovations to his customers around the world. The formulations within the Evogen Nutrition supplement line are crucial to the success of any FST-7 program because of their effect on growth, repair, and muscle volume.

The Origin of Evogen Nutrition

It used to be that only a select athlete clientele had access to the ultra-exclusive, custom nutritional supplement formulas developed by Hany. As He turned out winner after winner at national level and professional bodybuilding contests, people began to notice that all of these champions had something in common: In an addition to being bone-dry shredded; they were all big, full and round.

Many possessed roundness and fullness only rivaled by bodybuilding legends. An underground buzz began about some of the formulas Hany was using with his athletes. Although many of the components were accessible, results were limited for several reasons: One, the athlete was forced to combine several different products which also had antagonistic ingredients, fillers, and sugar in an attempt to replicate the formula. Two, nobody knew the correct ratios of ingredients necessary to achieve the desired effect. Three, the premium quality, ultra soluble, bio available, versions of the key ingredients were not yet commercially available to the public. Evogen had no choice but to fill the void by responding to the incredible demand in the marketplace.

When you purchase an Evogen product, you can be absolutely confident that it was developed by an athlete, for athletes. Hany began competing in Natural Bodybuilding as a teenager, and continued his amateur bodybuilding career through his time at UCSB; allowing him to put his classroom learning into practical use in the gym, the field, and on the stage.