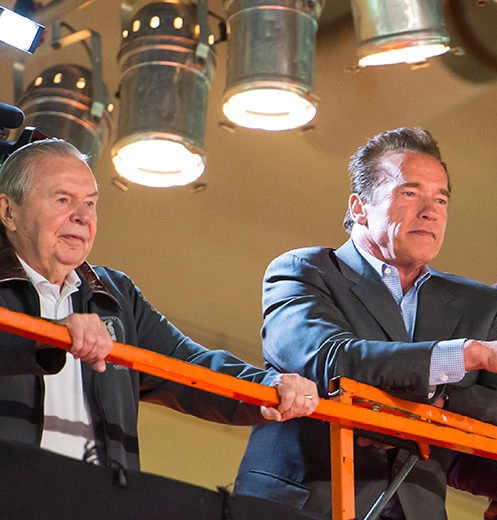 Today is a special day in the bodybuilding and fitness world.

Without Jim being involved in the bodybuilding industry, the Arnold Classic most probably would not be where it is today.

Mr. Lorimer and his son Bob have dedicated most of their lives along side Arnold Schwarzenegger to this great contest.


Below is the biography of Jim Lorimer courtesy of the International Sports Hall of Fame.

Jim Lorimer was born on October 7, 1926 in Bristol, Pennsylvania, USA. In 1949, Jim married Martha Jean Whittaker. They have 3 children and 4 grandchildren.“When I was 13 years old, I wrote to FBI director J. Edgar Hoover and asked for advice on becoming an agent. Mr. Hoover’s response was that I should first become an attorney or an accountant.”

Following service in the U.S. Navy at the end of World War II, Jim took J. Edgar Hoover’s advice to heart. In 1949, Jim graduated with a Bachelor of Arts degree from Ursinus College (Collegeville, PA). Then, in 1951, Jim earned a Bachelor of Law degree from the Penn State Dickinson School of Law [Pennsylvania’s oldest law school].

True to his dream, at 25 years old, Jim became a Special Agent of the Federal Bureau of Investigation and, from 1951 to 1954, served with distinction in this world-renowned law enforcement, intelligence and investigative agency. In 1954, Jim joined Nationwide Insurance Company, one of the largest insurance and financial services companies in the world. In 1972, Jim earned his Chartered Property Casualty Underwriter (CPCU) professional designation and, by 1979, has risen through the ranks of Nationwide to become Vice President of Government Relations where he worked until 1991.

As Jim fondly recalls, “While with Nationwide, my responsibilities included acting as liaison with many different state and federal legislative and regulatory agencies and maintaining grassroots programs. One such program – one of the highlights of my career with Nationwide – was the founding of their corporate fitness program which I directed for 15 years.”

This was by no means Jim’s first foray into the field of sport.

Says Jim, “Sport is life in a microcosm – sport teaches you to prepare, train, compete, win and lose.” Jim should know. In high school, he lettered in four sports, captained the football team and led the student council. What he never imagined was that his growing passion for sport would eventually lead him to partner with Arnold Schwarzenegger for more than three decades in creating what has become the largest multi-sport festival in America.

Jim’s journey to sport promotion actually began in the late ’50s. In what would become a watershed moment in his life, Jim recalls being intrigued with an international track and field meet between the United States and the Soviet Union, held in Philadelphia in the summer of 1959. “I knew that the Soviets had undertaken a national sports development program with the intention of demonstrating the superiority of their program and society.”

“The Soviets declared victory by combining the men’s and women’s scores,” Jim explains. “The U.S. men’s team won, but our women’s team did not perform well.” Jim felt strongly that the women were not properly prepared for international competition and that, given the opportunity and the right training; he believed American athletes, men and women, could be the best in the world in any sport. Jim decided then and there to take action.

Jim immediately proposed to the Columbus Recreation Department that a four-year Olympic development program be implemented to train top female athletes. He then convinced Ohio State University to allow women to train at their indoor track. Under Jim’s leadership and coaching, the Ohio Track Club Girl’s Team won the National Championships in 1961.

In 1967, Jim was asked to run the National Weightlifting Championships and Mr. America contest in Columbus, Ohio. As a result of the success at this event, Jim was then asked to chair the World Weightlifting Championships and Mr. World contest in Columbus in 1970. He invited the top six bodybuilders in the world – including a young Austrian by the name of Arnold Schwarzenegger.

Peter McGough, then Group Editorial Director of Muscle & Fitness and FLEX magazines, stated in his article “The Classic Act”, “For both, it was a milestone event in many ways. That Mr. World contest was the first time that Arnold beat Sergio Oliva, who was then the reigning Mr. Olympia. Looking back, Arnold says, ‘Winning the Mr. World changed the signal that had been hard to change – the signal that said Sergio cannot be beaten.’ From that platform, Arnold beat Sergio a few weeks later and became Mr. Olympia. But one suspects Arnold’s friendship with Jim, which began at that event, has become, over the years, more precious to Arnold than any trophy he ever won. The duo will tell you they felt an immediate empathy and connection at that first meeting. They agreed that once Arnold finished competing, they would join forces to promote bodybuilding shows.”

After winning in Columbus, Schwarzenegger told Jim. “This is the best contest I’ve ever been in,” and committed to help him create what would later become the Arnold Sports Festival. To manage this event, Jim leads four full-time staff, 600 volunteers including a medical staff of 150 doctors and nurses, and 30 committees. The 2009 version will feature 37 events including 12 Olympic sports and will welcome more than 170,000 visitors and 17,000 athletes to four Columbus venues. [Editor’s note: the 2010 version boasts 44 sports and events, including 12 Olympic sports, and 18,000 athletes!]

Peter McGough continues in his article, “Now [in 2008], the name of the weekend has been changed to the Arnold Sports Festival, which the duo feels better suits the all-encompassing nature of this world-class celebration of sport and fitness. In discussing the sports festival’s success, Arnold acknowledges that, although it would be nice to take credit for the growth and spectacular success of the event, the recognition and acclaim for organizing this massive operation belongs to one man: Jim Lorimer. ‘Jim is a man of great vision, principle and loyalty,’ Arnold says. ‘Throughout our years together, we have continually operated on a simple handshake agreement: no contract has been necessary and our steadfast faith in each other will continue,’ ‘Nuff said.”

With the addition of more events, such as the 5k Pump and Run, Active Aging, Arm Wrestling, Archery, Bench Press, Boxing, Cheerleading and Dance Team, Cycling, Dance Sport, Fencing, Grappling, Gymnastics, Martial Arts, Powerlifting, Strongman, Strength Summit, Table Tennis, Weightlifting and Wrestling, the Arnold Sports Festival has become the largest multi-sports fitness celebration in the U.S.A.. Every year the event, which now encompasses a three-day weekend, gets bigger. In 2008, an IFBB international amateur flare was added that saw the world’s elite amateur bodybuilders, fitness and figure athletes competing on the Arnold Classic stage. [Editor’s note: this event in 2010 has attracted entries from 46 countries. Between the amateur and professional events, there are some 500 competitors!]

Apart from sport, Jim is also highly involved in his community. In the 1960s, Jim was named “Man of the Year” in Worthington, Ohio, a suburb of Columbus. He was also named one of the “Top Ten Men of the Year” in Columbus; one of the “Top Three Physical Fitness Leaders” in the United States. Jim served as a member of the American Bar Association. He was Mayor of Worthington from 1967 to 1979, Vice Mayor from 1980 to 1995, and Mayor from 1996 to the present.

In 1998, Jim was the proud recipient of the “Greater Columbus Hospitality Award” for his role in bringing international recognition and economic contributions to Columbus with the Arnold Sports Festival.

Jim is a Certified Personal Trainer by the National Academy of Sports Medicine. During the administration of President George H. W. Bush, Jim served on the President’s Council on Physical Fitness and Sports.

Jim has been active in the IFBB for over 30 years. In 1976, at the IFBB International Congress meeting in Montreal, Canada, Jim was part of the first official meeting of the newly formed IFBB Professional Committee, along with Arnold Schwarzenegger (Chair), John Balik (USA), Boyer Coe (USA) and other key officials from around the world. Jim still serves today as an invaluable member of this committee.

Said the late IFBB Professional League President Ben Weider, “I have known Jim Lorimer since 1976 and his involvement with the IFBB at that time played a key and very important role in the development of bodybuilding in the U.S.A. This is the 20th year [referring to the 2008 anniversary year] that Jim is organizing the Arnold Classic and I commend him on his leadership and promotional skills, which are unparalleled.

Jim is an extremely hardworking and dedicated professional whose passion for sport; in particular, bodybuilding and fitness, is clearly evidenced by the fact that the Arnold Sports Festival has become, under his stewardship, the largest multi-sport festival in the U.S.A.

Our relationship has always been one of mutual respect, based on our love of sport in general, our passion for bodybuilding and fitness in particular, and our belief that a healthy and fit lifestyle is of great importance to everyone, especially our nation’s youth. ”

Jim lists his hobbies as “reading and working out”; his favorite books as “anything related to Shakespeare and linguistics”; his favorite movies as “all James Bond films”; his one-word description of himself as “joyful”; and his words to live by as “do unto others as you would have them do unto you.”