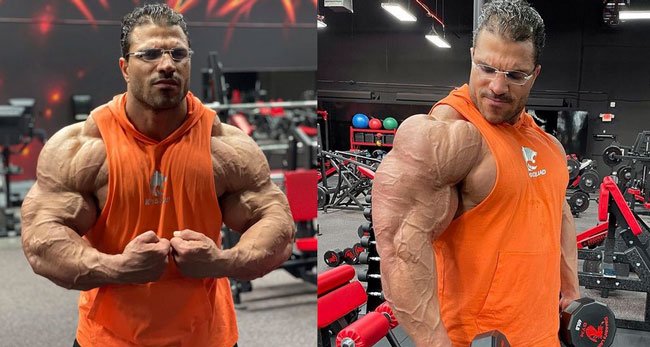 Hassan Mostafa is looking to brush aside his fellow competitors at the 2021 New York Pro.

The 2021 New York Pro is taking place in Florida on 15 May, 2021. With the Arnold Classic USA still undecided, the New York Pro is literally the biggest competition after the Olympia Weekend.

The official line-up has not been published at the time of publishing this article, but a number of high profile athletes will be taking the trip to Florida.

Until now, the media have been focusing on the younger generation of bodybuilders, such as Nick Walker and Blessing Awodibu. These two athletes have been trading words on social media in relation to this event.

As Blessing and Nick are getting the most exposure, this does not mean that they will be favorites to win the show. The 2021 New York Pro will be Nick’s second pro show while Blessing will be making his pro debut.

One bodybuilder that will surely be a favorite to win the event is Hassan Mostafa.

Even if Nick and Blessing step on stage at their best condition, it would be difficult for them to match Hassan’s paper thin condition and size.

Hassan was on course to challenge for the 2020 New York Pro title, but a serious infection during the contest held him back. With all the problems Hassan still managed to place fourth.

Thanks to social media, we are seeing more of Hussan and he is turning heads with his size and condition.

Hassan would be very difficult to defeat, if he steps on stage at his best. Even competitors twice his size would have problems matching his condition.

Training at Flex Lewis’ new Dragon’s Lair Gym in Vegas, Hussan is lucky to have Flex Lewis to guide him through his workout routines.

Expect Hussan to be one of the last men standing, when the smoke clears at the 2021 New York Pro.