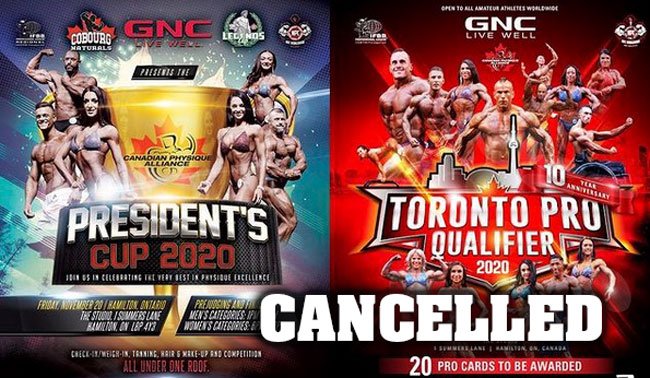 Canadian Physique Alliance President Ron Hache, published a somber message of how he could not go ahead with the Toronto Pro Qualifiers and CPA President’s Cup.

In the weeks leading up to the events, Ron published a number of posts on the CPA’s official social media pages with updates leading up to his final decision.

As Toronto health officials started to clamp down on large events, the new lockdown that is going to last for 28 days did not help the situation.

In Ron’s message, he explained that he did all he could and he felt the CPA was ‘targeted’ because of their popularity.

After contacting various venues, Hache decided that it was going to be impossible and decided to cancel both events.

Ron apologized to all the competitors that prepared for the event and especially the ones that traveled from provinces around Canada.

Ron promised that the CPA will refund all registration fee’s. While the majority of athletes responded positively, some went so far as requesting their NPC membership fee refunded.

As the Covid-19 situation continues to cause problems all over the world, it looks like the bodybuilding and fitness industry will continue to be affected into the 2021 contest season.

Dear Competitor:
Late this morning the Simcoe Muskoka District Health Unit advised that we could not hold the event in the City of Barrie.
We have been trying since we received the news to find another location.  Unfortunately we were unable to and at this point we must regretfully cancel the event.
We apologize for the inconvenience (to put it mildly) that this has caused.  We, like you, are devastated to deliver this news.
We are grateful to our loyal competitors who have worked so hard under pandemic conditions to participate. Our heartfelt apologies to all of you.
We will refund your registration fees.
We will respond to messages as soon as possible.