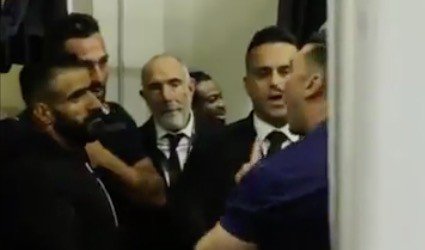 There was drama backstage at the 2019 Mr. Olympia that involved bodybuilding star Hadi Choopan and member of Oxygen Gym.

From the information given to evolutionofbodybuilding.net from various sources, Oxygen Gym officials basically told Hadi Choopan he has no chance of winning and Roelly Winklaar or Brandon Curry will win. This news all over Iranian social media accounts.

It was also reported that William Bonac separated the Hadi and the Oxygen Gym officials when they were about to get into a fight.

Other information given to this website was that police where called on the scene.

In the video you can see Olympia officials trying to calm Hadi Choopan and tell him that this will not happen again and that he is in a sacred place.

One of the officials can be heard saying that they will be taking action on this incident.

We will publish more information as it comes in.