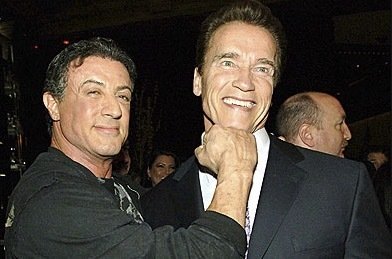 Sylvester Stallone is one of the biggest action stars in the history of entertainment.

In a recent interview with Variety, Stallone confirms that he and Arnold Schwarzenegger were not the best of friends.

In his prime, Stallone was not the only one pumping out the big action films, he had Arnold Schwarzenegger to compete with.

Stallone reminisces about the time when he met Arnold Schwarzenegger at the 1977 Golden Globe awards when he won Best Picture for Rocky. On the same night, Stallone had to sit and watch Arnold win the award for New Star of The Year for his part in Stay Hungry.

This night in 1977 started a ten year battle between the two mega stars. Stallone admits that they could not stand each other and could not be in the same room together.

Today, Stallone and Schwarzenegger are the best of friends and they meet a number of times during the year to celebrate personal special occasions together.

Stallone continued to talk about his future plans and confirms that he is not finished yet when it comes to films.

The new Rambo film was also mentioned. Stallone is truly excited about this new addition to the series of films.