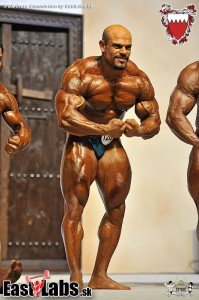 The new Amateur Olympia king is Ibrahim Sami Fahim of Egypt! He succeeded Mamdouh “Big Ramy” Elssbiay, also from Egypt. Both are the Captains at the Bader Boodai’s Oxygen Gym in Kuwait. Ibrahim Sami Fahim has earned himself a spot to compete at the 2014 Mr. Olympia.

Ibrahim started his international career in 2003 as a junior, winning bronze medal at the IFBB Juniors and Masters Worlds in Tenerife, Canary Islands. In 2006 moved up one place, finishing to the 2nd position.

In October 2013 went to Madrid and grasped the Arnold Classic Europe title (100 kg category). In Bahrain decided to try the super heavyweight category, over 100 kg. Won it and then the overall title.

From early junior stage, through men’s classic bodybuilding, up to bodybuilding super heavyweight division and Amateur Olympia title. It has taken him 10 years of hard training and gradually progressing to reach the top muscle quality and maturity. Congratulations to a new champion!

See all the final round photos here (photos by eastlabs.sk)