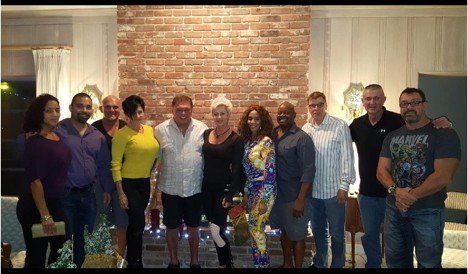 On Saturday, December 9th, in Gulfstream, Florida, a total of twenty-five Physique enthusiasts, many Promoters or people interested in promoting, met to create IFBB Physique America in the state of Florida.

Under the direction of newly appointed Chairman, George Jonson, the Florida Federation is already working as a unit and preparing to promote an event which will qualify athletes for the Arnold Classic Brazil that will be held in San Paulo in April.

Athletes selected to represent the US in this prestigious event will have full expenses paid.  This event will mirror a similar event that will be promoted in Texas.

“IFBB Physique America is for the athlete and we will provide the athletes with opportunities to compete in exotic locations around the world, and additionally, the athletes will have full expenses covered” states IFBB Physique America CEO, Wayne S. DeMilia. “What George Jonson and our Florida Promoters are doing, which is working together as partners on the first promotion in the state to qualify athletes for Arnold Classic Brazil, is unprecedented in our Sport.

This shows the dedication and commitment of our Florida Promoters to the Sport, and more specifically, to the athletes” DeMilia pontificates.

Chairman George Jonson states, “it is an honor for me to lead such a dedicated group of Promoters, Judges and Athletes from the state of Florida. The energy in the room during the meeting was beyond expectations. We have a group of Promoters who exude integrity and professionalism and we are selecting Judges who are at the high end of the honesty scale.

As for shows, we were hoping for maybe 1 or 2 shows in Florida in 2018 under the IFBB Physique America banner but it now seems that we will have possibly 10 shows in our initial year of existence.”

Photo: Chairman George Jonson (3rd from the left) and some of the Promoters who were in attendance Dec 9th.