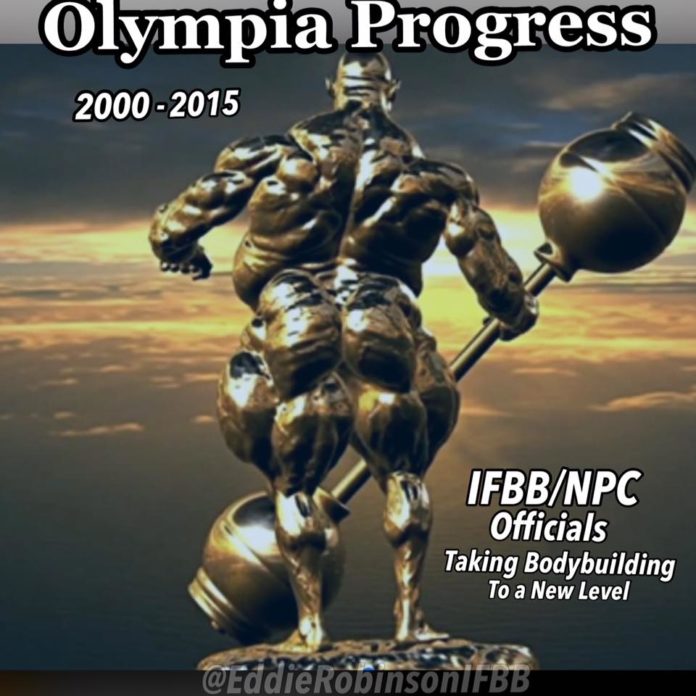 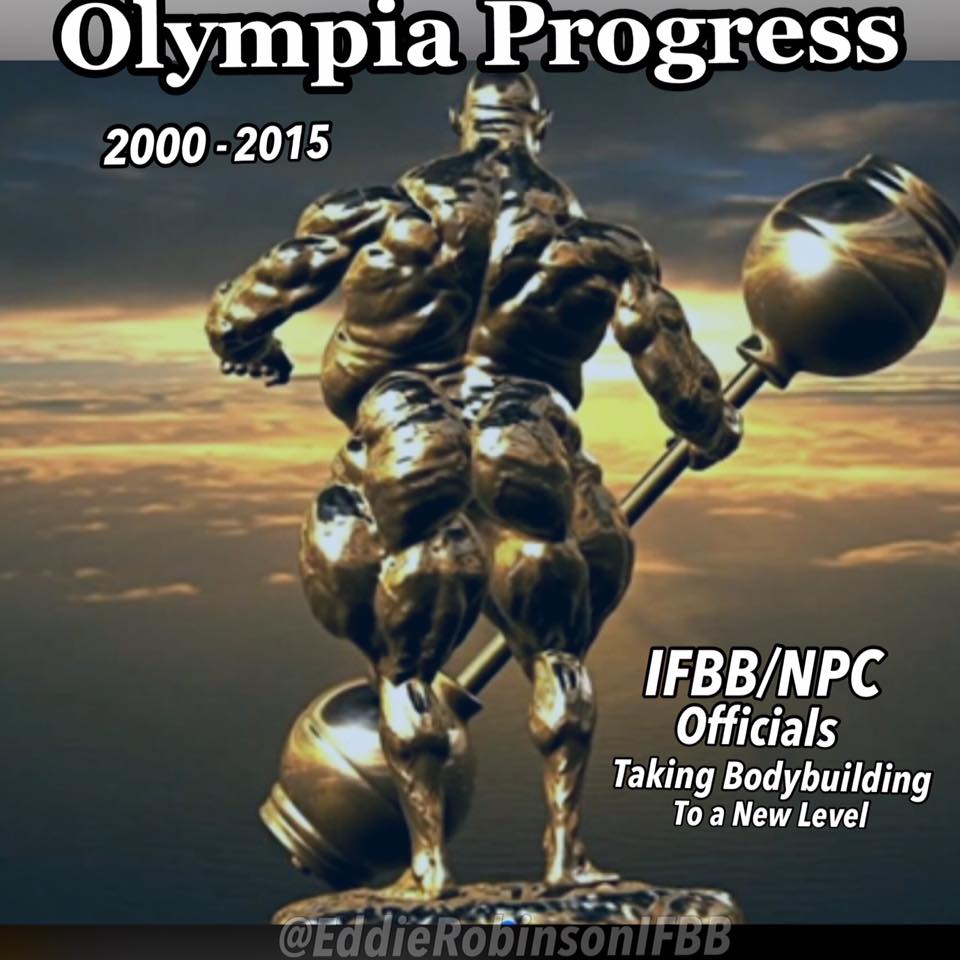 IFBB Pro Eddie Robinson who was a very popular bodybuilder in the late 80’s and 90’s has made another scathing post against the IFBB and NPC.

As Eddie does have great respect for both organisations, he his not holding back from pointing out of what he thinks are major defects in the IFBB and NPC judging criteria.

Eddie is using other organisations as examples of how things should be done in his long discussion on the subject.

The image that Robinson uses a photo that depicts a very fat Sandow trophy with the dates 2000-2015 Olympia. This is obviously an attack on the winners and competitors of that era. As well the jab at the judges “IFBB/NPC Officials – Taking bodybuilding to a new Level”

The entire post can be seen by clicking HERE

Eddie as well touched the sensitive subject of what the pro bodybuilders from the past and present take to prepare for a contest and as well went on to reveal what he took.

Robinson reposted an article from the website T-Nation describing all the bodybuilders that were either injured of died from the possible use of these substances.

The article is called “Big Dead Bodybuilders – The Ultimate Price of Pro Bodybuilding?”

The article is very revealing, naming some of the biggest stars in the business.

The way it looks is that Eddie Robinson feels it is his duty to promote this article for the good of the sport.

The reason for all this is that Eddie Robinson wants the ideal physique to comeback in the sport of bodybuilding.

The was it looks is that Eddie is blaming the new substances on the look of today’s bodybuilders and he just wants everything to go back to the way it was in the 70’s to early 90’s.

Related article: “No I didn’t use GH, insulin or synthol!!” – Eddie Robinson

Before I answered some of your questions I want to thank some of these pros on this post such as Mike Quinn for sharing his story per heart attack and stents shinning some light for today’s future athletes a good read with no holds barred. Much Respect! 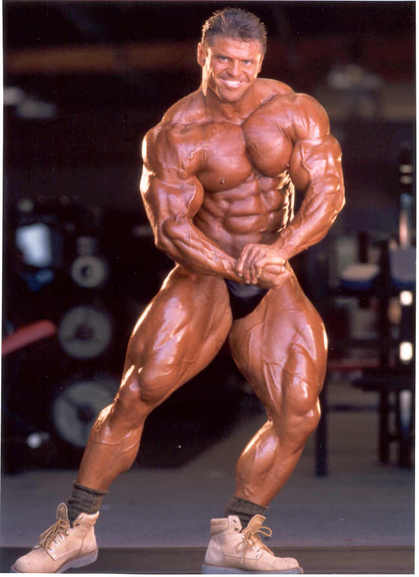 To answer your question to, “What did you take Eddie during your 13 year IFBB Career?” I really hate to answer this question as no one believes me I really don’t give two shits. However, to answer your questions, yes I did dabble a little with test, winstrol, anavar, and a little deca for the joints during my powerlifting career that earned me 2 world records in which one contest was tested. However later on during my bodybuilding years I never took nearly the huge amounts I see today. Most don’t remember I competed in the 1990 Olympia clean! Yes Clean! I didn’t do my best, as I only placed 10th, but proved cracking the top 10 could be done clean I did this under the direction of Joe Weider. Joe had me tested by Bob Goldman and other testing labs 2x a month for a year before the Olympia. Last time I stated this everyone said bull shit. Well I can really give a shit but it’s the truth! When I won my first pro show 1989, the IFBB Niagara Falls Canadian pro, right after winning the Mr. USA. I only used a little winstrol, Anavar, and test suspension as this is what my doctor monitored me on. The dose was very small; 200mg test week and 20mg winstrol a day. He then changed out to anavar 3 weeks out from the show. When I was with the WBF right after my 1990 Olympia, I remained clean. Vince McMahon tested us randomly if you recall each week even though the federation lasted only 2 years I remained for 4 as I stayed on and endorsed ICO/Pro with Vince McMahon and Dr. Fred Hatfield . The reason I was selected was due to never failing a drug test, as they liked my clean look this was 1990-1994. When I came back to the IFBB contracted under Joe Weider, I went back to my old regime but was basically black balled by the IFBB judging Wayne Demelia due to my leaving the federation. I still cracked the top 5 and top 10 in the Arnold Classic, but refused to use the new protocol that all pros were on: GH, Insulin. Even though my colleagues gained 30/40 more pounds after I left for the 5 years and came back, I kept the same look I won the USA and Joe was happy with my look. Even though I didn’t win the Olympia or in the top 3, I sold more publications in the history of bodybuilding with my 85 covers and 360 training/diet articles. I was a marketing monster for Joe Weider on all nutrition ads and marketing promotions. I was blessed to grace all publication until 2002 when Joe and I both threw in the towel as he sold to AMI David Pecker. I then also retired because I refused to work for anyone but Joe Weider and hung up my IFBB SPEEDO for good. And remained drug free. I’m at 250 now and with a clean bill of health training every day and training future athletes rather on the stage or on the field to be their best. I have attached my drug testes for 4 years 1990-1994 and proved you can crack the top 10 in the Olympia drug free in the 90’s.. However you must remember GH, insulin, and synthol weren’t the products of choice back then nor do the physiques look the same!! The reason for being clean for the Olympia wasn’t by choice. I wanted to win, however I got paid $$ for proving Joes Point. You can place top 10 in the Olympia clean by the use of Weider products, as was the campaign and reason for the strict drug testing that year. I will post lab tests which can be verified by Dr. Robert Goldman with the IOC. My point in this post is you do not Need GH, insulin, synthol to be the best, to get covers and be the greatest specimen of man, however you will need it if you wish to be a mass monster and be in the IFBB today! The judging criteria has changed a great deal as this is what the head officials tell me it’s evolution of bodybuilding. I call it ruining the sport that once was marketable, had respect and always was seen fitness publications at the checkout in all stores and TV. That is no longer the case. I was in this month’s FLEX, and we had to go to a book store to find it, as all magazine racks at the main grocery stores no longer carry those magazines. Time for a change. Time to revamp this federation on what it was founded on and stop the disgrace and bad publicity it’s getting. There are new federation now coming out of the wood work as they see the public and athletes want a change, however a few are ran by some very venomous snakes that came from the current IFBB. They see the $$ being made but really don’t have the athletes interest at hand. They are selling a horse and pony show to join them on empty promises, as one mans background check was an anabolic trafficker with sexual assault charges. Is this who you want taking over for change with the sport and athletes best interest in mind? I think not! Do your Du Diligence and compete for yourself for the health of it. I don’t want to see you on the death list that was published above trying to be a pro to make a living. Life is short!! Weider sold out for a reason in 2002 as he seen the fall and wanted to wash his hands before it did. We spoke often regarding the falling and his words 10 years ago have now came to fruition. 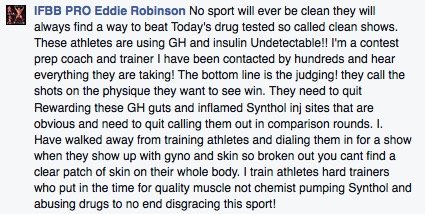 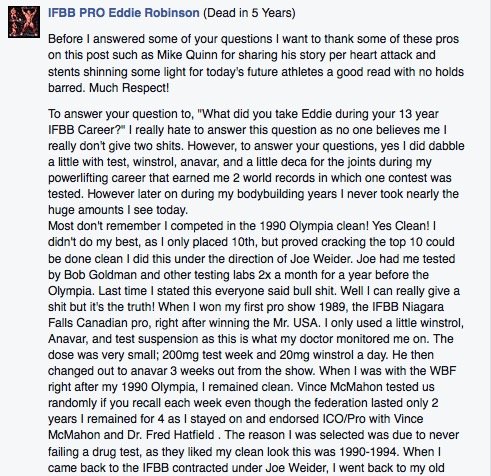 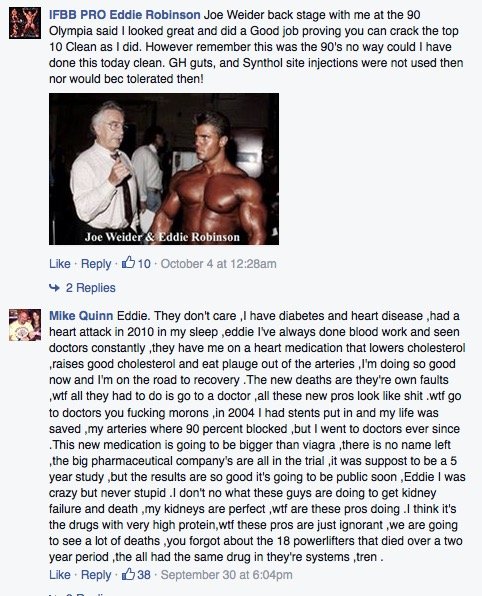