IFBB Pro Hidetada Yamagishi talks to Kevin Grech of evolutionofbodybuilding.net about his bodybuilding career, training routines and what it is like being part of Team Gaspari.

What was the moment that made you want to be a professional bodybuilder? Or is it something that happened gradually?

I always wanted to be a pro bodybuilder since I started competing at the age of 19.

When you were younger living in Japan, the culture is obviously slightly different than the USA, how did your family, friends and others look at you as a bodybuilder when you were younger?
I always loved sports since I was a little kid. My family and friends have always supported my passion in whatever I do.

Moving on to training, what is your favorite training routine? And how many days a week?
I change my routine from time to time. Right now, it’s a few weeks before Arnold classic and I have not taken any time off for a month. Since I have been in the sport of bodybuilding so long, I don’t like to stick to a certain routine anymore. I like to train whatever I feel like so I don’t get bored.

Your favorite bodypart? Least favorite?
Favorite (easy to grow) chest and quads. Least favorite (I like to train them but its not easy to make them improve) back and triceps

Do you prefer training heavy all year or do you have heavy and light days?
When I was in my 20’s to early 30’s, I was training very heavy all the time. Right now, like I said, I train whatever I feel like. 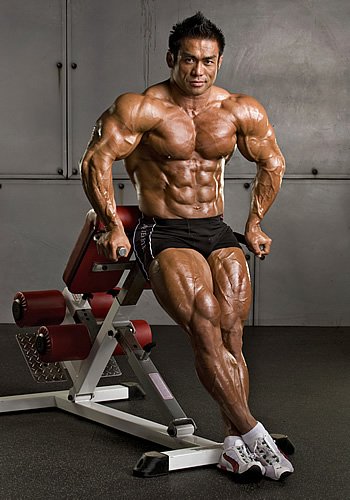 Cardio is always a hot topic for the bodybuilder, what is your view on cardio during off-season and during contest preparation?
Its all depends on my condition. I sometimes would have to do two hours cardio in a day, sometimes only 30min…

Regarding your diet, in the off season do you still follow a strict eating plan, or do you relax a bit?
I eat clean all year now. I like that way now maybe because I’m old lol. But when I was younger, I ate whatever I wanted in the off season and got fat.

Coming back from a wrist injury is not a easy task, how did you work around this?
I bought special straps called Isolater, which allow you to train without grip, right after I broke my wrist. I used them about six months up until I recovered from surgery. I had two surgeries and I almost forget about the injuries in the gym now. It took almost a year to recover but its all good now.

You are a member of Rich Gaspari’s team, what is it like training and working with a legend such as Rich?
I watched him compete in the Olympia and also watched his training video over and over when I was living in Japan. It’s my honor to be part of his team and he treats us very good because he knows what it takes to be a professional athlete. Its funny I still sometimes feel very strange that he knows me and I am working for him.

Flex Lewis has left the team after winning two 212 Olympia’s and Branch Warren has been signed on as well. Will this change the way you prepare for a contest? Do you think having a heavyweight such as Branch Warren will push you harder?
Having Branch in same team is awesome because I always admired his work ethic. As for preparation, we all have different characters and I don’t think anyone can be same as me. Rich, Branch and I will be the best team in this sport for sure.

What is the best advice that Rich Gaspari has given you since you have been working with him?
Rich has taught me how to be successful not only as an athlete but also as a businessman. He once told me how he started this company and always has showed me how hard he worked to be successful. People would think it’s easy to start up a supplement company if you are a famous pro but its not like that obviously. I am truly inspired by Rich and I finally opened my own store called BodiCafe in Las Vegas last year.

You have always had good results in IFBB shows that you have competed in, what was the decision to go down to the 212 Division? Will you find it easier to keep the muscle that you are used to having and going down in weight at the same time?
I feel I am finally ready for the big title, that’s why I decided to compete in the 212 division. To me, making weight is not difficult. I will arrive at 212lbs without any problems. To be honest, when I was competing in the open division, I never really knew what my weight was.

Bodybuilding today has changed totally from the 80’s. Competitors are getting bigger year after year. Do you think this a good situation regarding condition?
Well, I think we are bigger and also much harder. In 80’s, only Rich Gaspari had ripped glutes.

Rich Gaspari is a 80’s  – 90’s bodybuilder who has a work ethic of going to the limit in the gym and not cutting corners. Do you believe his philosophy still applies today? And does it work for you?
Yes, there are always some lazy pros and hard working pros in any era lol. I’m am one of those pros that needs to work hard.

Who do you think your biggest rival will be in the 212 Division at the Arnold?
My mind set is bringing my best package to any show I compete in. I never really think of any other guys and the 2014 Arnold Classic will be the same. 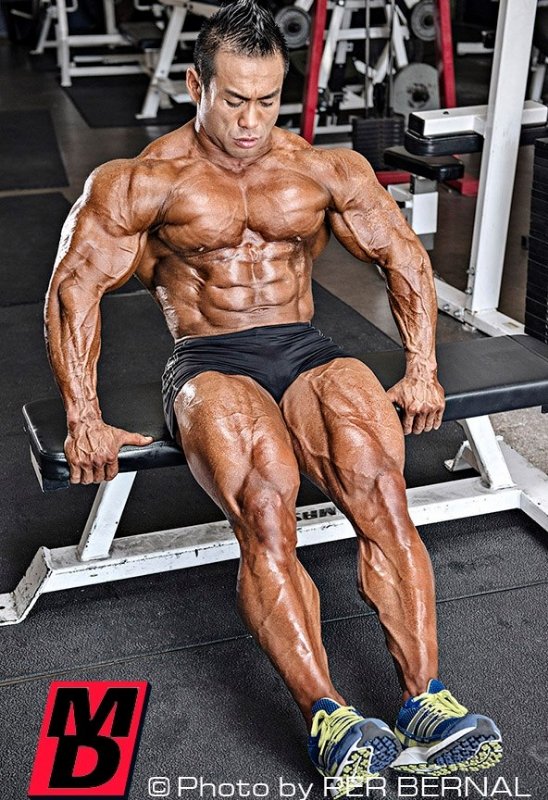 Winning an IFBB Pro card, do you think it is harder or easier today compared to 20 years ago?
Of course a 1000 times easier now. Just having a IFBB pro card doesn’t mean much anymore. But working to be a “top” IFBB pro always means something.

What can be done to improve the sport of bodybuilding?
Sport is growing and some guys are making millions, The Olympia Weekend was packed last year and I expect more big things in the sport. I’m sad that woman’s bodybuilding is slowly disappearing… but if you don’t sell tickets, no promoter can hold the show. Iris Kyle is my business partner, we talk about it often and she agrees as well.

Who do you think was denied a Mr. Olympia title?
Shawn Ray

After bodybuilding, what do you have planned? Or what would you like to do?
We plan to open a few more BodiCafe oulets and I want to do my own bodybuilding show.

What other interests do you have not related to bodybuilding?
I don’t really have any hobbies, but I love animals. I do have a pitbull named Sakura.

What advice would you give to somebody just starting out in the sport of bodybuilding?
Bodybuilding is a marathon. It just takes time to reach your ultimate goal, so enjoy the process.