It seems that the trend of ‘bigger is better’ is starting to fade away. This is already showing when you see the overall winner of the 2015 NPC Nationals Women’s Bodybuilding category. Holly Pisarcik looks as she just walked out from a time machine from the early 80’s.

The press release in full:

The popularity of the IFBB Pro League continues to grow as a result of many factors including the introduction of more achievable, less muscular physiques in  Figue and Bikini and the newer divisions of Women’s and Men’s Physique.

All the the athletes who have competed in these divisions have represented the IFBB Pro League well. That being said, there has been a noticeable increase in muscle size across all of these divisions.

We would like to remind all athletes and judges that muscle size is only one of the many factors in judging competitors in these divisions.

In order to preserve the criteria in which all of these divisions were based on, we would like to see less focus on muscle size and more focus on symmetry, balance, proportion, definition and overall condition which are all equally important factors contributing  to an aesthetically pleasing and fit physique.

We look forward to seeing you all during the 2016 IFBB Pro League contest season. 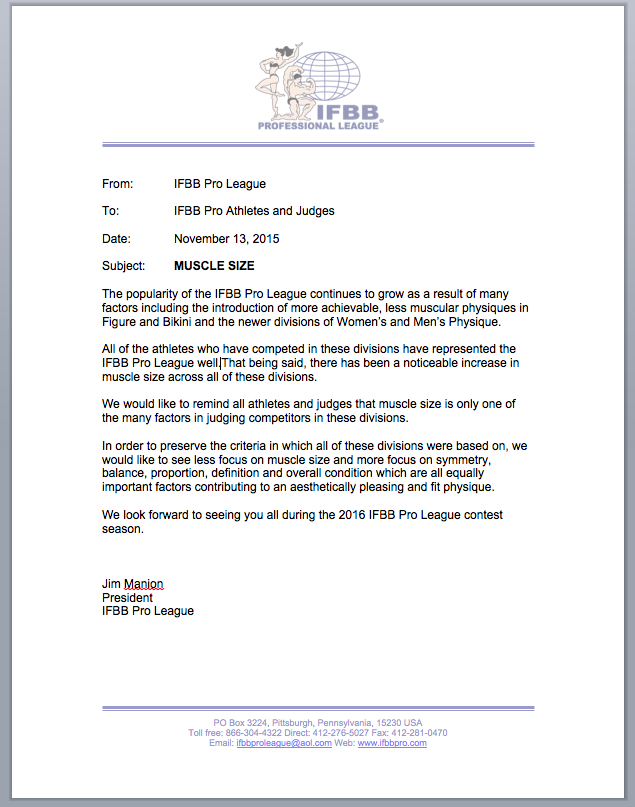