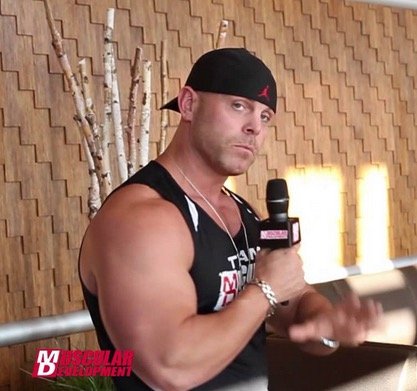 David Baye the former Editor of the online version of Muscular Development has been replaced just after a year of being named editor.

David’s job has now been taken over by long time employee Ron Harris.

A post that was removed by MD after David posted it stated that Ron Harris is already owed over $100,000 in wages.

Other fee’s owed amount to employees amount to $171,500 according to Baye.

David Baye turned to ‘The Dark Side’ RXMuscle.com to tell all on their Live show immediately after being fired.

David did not hold back on telling David Palumbo about all the negative things that are happening at the Muscular Development office.

David complained about a large number of people not getting paid. He put out the news that Bob Cicherillo left as well after he was not paid for his work.

Baye made shocking accusations of a large number of employees are owed amounts going into 5-6 figures.

Shawn Ray was also mentioned. David said that Shawn threatened owner Steve Blechman that if he was not paid he would not work.

Apparently, Muscular Development had sponsor funds for shows, but they were not utilized for shows according to David Baye.

In a post on MD’s forum by new editor Ron Harris, he made it point to state that MD will be focusing their live Play by Play on bodybuilding and 212. So basically, physique, classic bodybuilding, bikini, and fitness will be brushed aside. So basically the quality of show coverage is moving backwards instead of forward.

We wish all the best for David Baye as he is one of the hardest workers in the industry giving fantastic coverage to all divisions of the sport. We hope that somehow he finds a way to still contribute to the industry.

Well, it is with regret but also a sigh of relief that I can officially say that as of this morning, I am no longer with Muscular Development.

While I don’t want to sound like bitter grapes, I can say with conviction that in my 27 years of employment, I have never worked for a more unethical boss than Steve Blechman. After my promotion in 2016, it became harder and harder to do my job on a daily basis seeing the manner in which hard working employees and professional athletes were disregarded by not being paid and blatantly lied to. Had I known the truth about how business was handled and not been repeatedly lied to before taking the promotion, I would’ve thrown in the towel before day 1.

That said, I will forever be thankful for the job and the opportunities it afforded me, most notably the friendships I have made. I’m not sure what the future holds for me in regards to employment in the fitness industry, but I’d like to still make it to a few shows a year to see all the friends I’ve made over the past 4 years.

In regards to MD, the cold hard truth is that the owner just doesn’t want to pay anyone for their work. I don’t say this out of spite, but rather to inform people who may consider working for them sometime down the road. They owe photographers, videographers, writers, graphic artists, athletes, columnists, sales reps and more as much as $10,000, $50,000 and even over $100,000…..EACH.

Meanwhile, the owner Steve Blechman continues to take ridiculously lavish vacations while telling people he can’t pay them because there are “cash flow issues”. When you are the owner you can’t say your business has “cash flow issues” while you’re posting pictures of vacations on private yachts to the tune of $50,000. How about taking that money and paying the honest, hardworking employees that bust their asses for you week in and week out.

While the opportunity to travel to these shows and be in the atmosphere of it all is certainly fun, unless you are willing to work for free I strongly recommend that you get paid AHEAD OF TIME for your work if you do decide to work with MD, if not, you’ll literally have to beg for every dime for months on end.

To elaborate further on the issue and speak my side of the story I just got done interviewing with Dave Palumbo. The interview can be seen at rxmuscle.com

Once again, thanks to everyone I’ve met over the years for all your respect, hospitality and friendships. 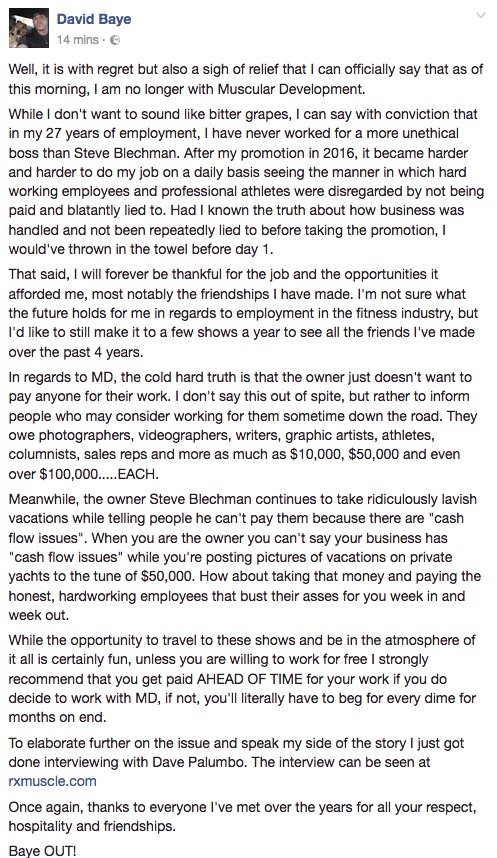