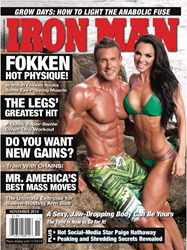 Iron Man Magazine, the world’s leading bodybuilding and fitness magazine and the fitness world’s pillar of information for training announced today that entrepreneur Binais Begovic and his wife Dr. Catherine Begovic have purchased the company.

Iron Man Magazine, the world’s leading bodybuilding and fitness magazine and the fitness world’s pillar of information for training announced today that entrepreneur Binais Begovic and his wife Dr. Catherine Begovic have purchased the company. Iron Man Magazine was founded by Peary and Mabel Rader in 1936. It was then purchased by John Balik and Michael Neveux in August of 1986 with Mr. Olympia Lee Haney on the cover. Iron Man Magazine was created to be a source of inspiration, information and transformation for the fitness industry. 79 years later it is still driven by those core values. Iron Man Magazine licenses to countries all over the globe including Japan, Australia, Sweden, Norway, and Italy.

Binais Begovic, a fitness athlete himself who was featured as a cover model for the magazine in 2006, brings a deep passion for weight training and scientific nutrition. Begovic was born in Montenegro and fled with his family to Sweden as a teen when war erupted in his native country. Begovic is an athlete ranking nationally in Judo and other fitness competitions. After winning competitions in Europe, he came to Los Angeles to shoot for fitness magazines and became an integral part of the fitness world. “Being on the cover of Iron Man Magazine and being featured in the magazine was one the critical moments in my career. It gave me credibility, international exposure, and was the launching point to expand my love of fitness into other businesses.” Begovic’s goal with the magazine is to make effective training and nutritional information accessible to everyone. “In a world where the Internet makes it confusing for people interested in fitness, Iron Man Magazine is the one place they can always turn to for credible information as well as up to date news, and the insiders’ look into the fitness industry.” He also would like to use it as a platform to launch new athletes into their fitness careers and provide opportunities for fitness enthusiasts to participate in a community where they can share ideas. Begovic’s vision for Iron Man Magazine is also to highlight other popular divisions such as Bikini and Men’s Physique in additional to traditional bodybuilding. Begovic is planning a re-design of the magazine, a re-launch of the website with informational articles and videos, as well as other events centered on the core values of “inspiration, information, and transformation.”

The launch of the re-designed Iron Man Magazine under the new ownership is projected to be the April issue 2015. The past owners John Balik will be retained as a consultant to the Publisher, and Michael Neveux as photographer/Design Director.