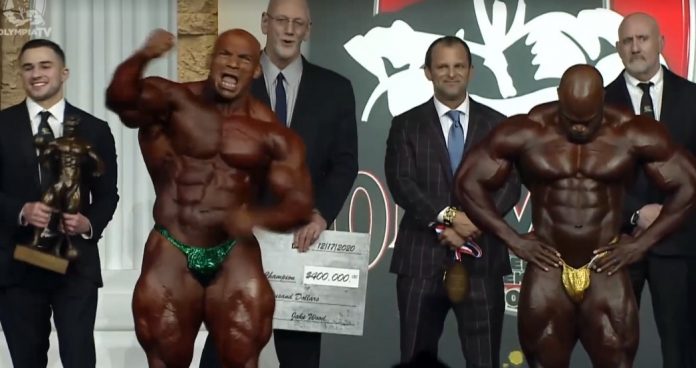 Big Ramy won the 2020 Mr. Olympia last December, what has he done in the last three months?

Dennis James and Chad Nicholls were the men behind the success of Big Ramy’s return to the Olympia stage.

Egypt erupted in celebration, the moment Big Ramy was named the winner of the Mr. Olympia title.

Big Ramy’s victory was great for bodybuilding, as the sport would reach new regions such as Egypt and its neighboring countries.

When all the celebration ended, it seems Big Ramy disappeared into the darkness and was never heard of again.

As April arrives, Big Ramy had ample time to rest and possibly start his campaign to defend his title in 2021.

We can easily compare Big Ramy to 6X Mr. Olympia champion Dorian Yates, who was nicknamed ‘The Shadow’. Dorian used to disappear from the scene and appear again to defend his Mr. Olympia title.

The difference between Big Ramy and Dorian Yates is that Dorian used to make guest appearances and appear in numerous magazines. Big Ramy on the other hand has done none of this until now.

Evolutionofbodybuilding.net is on record saying Big Ramy winning the Olympia is the best thing to happen to the sport, but we could be slightly wrong as the months pass by.

Big Ramy and Dennis James did sign a lucrative contract with Enhanced Labs after he won the Mr. Olympia title.

One would expect Enhanced Labs to take advantage of this situation and flood their YouTube channel with promotional content featuring Big Ramy and Dennis James.

One person that seems to be reaping the fruits of Big Ramy’s success is Dennis James.

Not long after the 2020 Mr. Olympia, Dennis James teamed up with Mr. Olympia owner Jack Wood to produce podcasts for Muscle and Fitness.

Not only has Dennis signed with Muscle and Fitness, but he is also a sponsored athlete and ambassador of Enhanced Labs.

The Olympia brand is suffering

Shawn Rhoden was labeled by many as a breath of fresh air for the Olympia brand.

Unfortunately, Shawn Rhoden’s success did not last too long due to some serious legal matters.

With Shawn Rhoden denied the chance to defend his title, the title was up for grabs in 2019.

The eventual winner would be Brandon Curry. Since Phil Heath’s reign, Brandon Curry was doing a fantastic job in representing the Olympia brand.

Brandon would bring his Sandow trophy to children’s football matches and explain what it takes to be a champion and what the Sandow title represents.

Brandon also embarked on a tour to promote his victory.

Unfortunately, Covid-19 put a halt to everything, making it very difficult for Brandon to promote the Olympia brand.

With all the problems and obstacles, Brandon still did a fantastic job promoting the Olympia brand.

Fast forward to 2020 and the Mr. Olympia was won by Big Ramy, with Brandon Curry having to settle for second place.

Since his victory, the only official appearance Big Ramy made was when he signed with Enhanced Labs at their press conference.

From January – April 2021, Big Ramy is rarely seen. Footage on social media is material from his prep for the 2020 Mr. Olympia.

Brandon Curry is still doing a fantastic job promoting the Olympia brand back in the USA.

Just recently, Dennis James has been promoting a show that is scheduled to premier on 4 April, 2021 on the Muscle and Fitness YouTube page. This show will feature Big Ramy.

Hopefully Big Ramy will give us some updates on what his situation is and if he will be making an appearance at any event in the USA or Europe.

It is really great and good for the sport that Big Ramy won the Mr. Olympia title. At the same time, Big Ramy has to push the Olympia brand where it matters most.

Bodybuilding is a very popular sport in Egypt and neighboring countries and with Big Ramy bringing the title home, they have a new hero.

When talking about the business of bodybuilding, it is important for the reigning champion to not just focus on his home country, but the entire world.

So far in 2021, the promotion of the Mr. Olympia title has been at a minimum and this must be rectified.