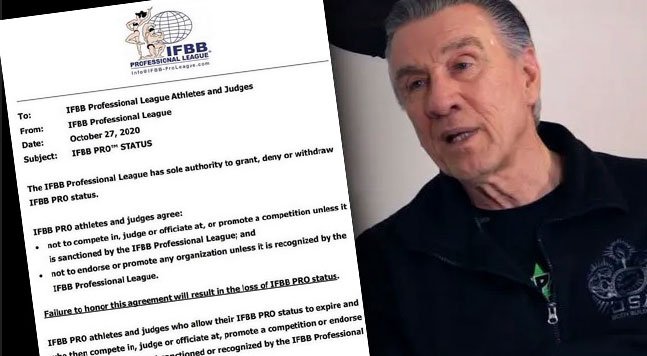 Every bodybuilding and fitness association and federation has rules that athletes, judges and delegates have to follow.

The letter continues to warn athletes and judges that they cannot compete, judge, officiate or promote a competition or organization unless it is sanctioned/recognized by the IFBB Professional League.

Failure to follow any of these rules will result in the loss of IFBB Pro status for the athletes and judges.

Athletes and judges are also warned, that if they let their IFBB Pro status expire and go on to compete, judge, officiate, promote or endorse another federation/association, that is not sanctioned/recognized by the IFBB Professional League they must re-earn their IFBB Pro status.

The IFBB Professional League must have been informed with certain movements within their organization for such a letter to be sent to athletes and judges.

Jim Manion made sure his event promoters understood that he was not happy with event cancellations during the Covid-19 crisis.

Evolutionofbodybuilding.net has also been informed that Jim Manion was not happy with the letter being leaked and he is on a mission to find out who leaked the scandalous letter.

Jim Manion’s IFBB Professional League is the same organization that criticized the IFBB led by President Dr. Rafael Santonja for having the same rules for their athletes and judges.

A number of NPC and IFBB Professional League delegates criticized the IFBB/IFBB Elite Pro for having too many rules for their athletes and judges.

The same rules that Rafael Santonja’s IFBB is being criticized for, were originally created by Joe and Ben Weider when they created the IFBB.

It has just been three years since the split between Jim Manion’s NPC/Pro League and Rafael Santonja’s IFBB/Elite Pro League.

While Jim Manion and his delegates criticized Rafael Santonja’s IFBB for their strict rules, they have now followed the same criteria.

No major organization can run smoothly without rules and this is something that Jim Manion’s NPC and IFBB Professional League are finally starting to understand.

On the professional level, it can now be said that Jim Manion is following the same criteria/rules implemented by Ben Weider and continued by Dr. Rafael Santonja.

It will be a matter of time before the NPC also tightens its belt in regards to the freedom of athletes competing with other organizations.

Failure to honor this agreement will result in the loss of IFBB Pro status.

IFBB PRO athletes and judges who allow their IFBB PRO status to expire and who then compete in, judge or officiate at, promote a competition or endorse an organization that is not sanctioned or recognized by the IFBB Professional League must re-earn IFBB PRO status. 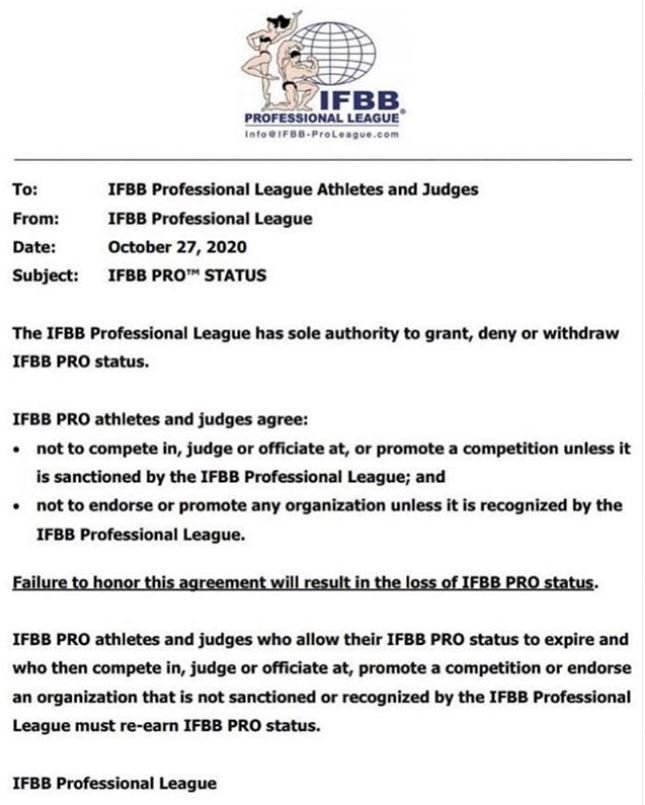