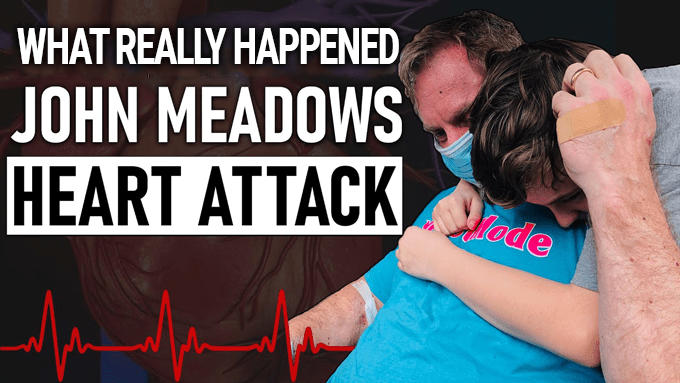 Pro bodybuilder and coach John Meadows is back home after suffering a heart attack earlier this week.

This is great news after so much negative news in the bodybuilding and fitness world.

John’s wife Mary kept all his fans and friends updated through his official Facebook page on a daily basis.

Update on John. As I mentioned yesterday one of the clots he had dissolved yesterday from the blood thinners thankfully. The other one will hopefully dissolve today on its own. They decided to not go in with a cath today, as things are going well. He is in less pain today also which is a good sign. They are running a lot of different tests on him tomorrow to see if they can get a better idea of where the clot started. These are many of same tests they ran in 2005. So no surgery, no stints and hopefully full recovery. Thank you so much for all the kind messages.

They did a test him for covid and he was negative. – Mary

John was training with a friend when he started not feeling well and decided to call an ambulance.

At the hospital numerous tests and procedures were made to make sure John would get through this ordeal and finally get back home to his family.

John emphasis that when something like this happens, it is no time to be a hero and call for help.

For the next couple of weeks, John has to take it easy, but in the near future he will get back to training to keep himself in shape.

Not long after arriving home, John made a video explaining in detail his entire ordeal at the hospital from the moment he arrived until he was sent home.

Top secret scene getting my Adamantium treatment. Seriously though, I can't thank the staff enough at @mountcarmelhealth. I had a crew of ICU nurses that took AMAZING care of me. I don't think that we appreciate what nurses really do enough, and the lives they impact. All the nurses there, THANK YOU..YOU ARE THE BEST.