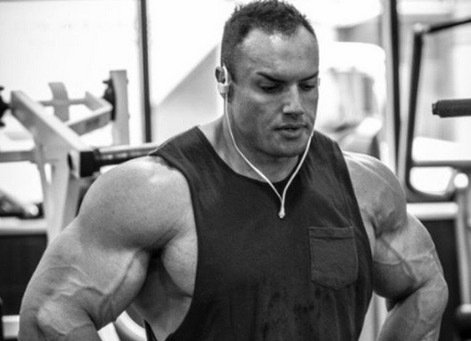 UPDATED July 20, 2019 17:00pm (GMT): Josh Lenartowicz confirms that he will most probably be at the 2019 Mr. Olympia of Evolutionofbodybuilding.net’s Facebook page. (See image below.)

7X Mr. Olympia Phil Heath has not confirmed, Big Ramy is out due to injury and Kai Greene is still playing around with fans if he is in or out.

The big story as well is 2018 Mr. Olympia Shawn Rhoden cannot compete due to his suspension from AMI after being charged with rape.

Another athlete, Josh Lenartowicz the fan favorite as well is a doubt for the 2019 Mr. Olympia.

Josh earned his qualification in Spain earlier this year at the Bigman Weekend.

It looked as everything was on track for Lenartowicz to make a great performance at the 2019 Mr. Olympia.

In recent weeks, Lenartowicz has been silent on social media and today he confirmed that he is having some health issues.

Josh did not give any indication of what his health issues are.

At the same time, Lenartowicz did confirm to evolutionofbodybuilding.net that he will most probably compete at the 2019 Mr. Olympia in a message on their official Facebook page. (See image below)

Below is Josh Lenartowicz message in full:

Hi Everyone, I hope this finds you well.
This is just a quick note to let you know that I’m currently dealing with a health issue that requires me to step back from social media and public interaction for a brief while. No need for panic and I’ll be fine but I need some time and space to heal and get back to full health. I’ll share in greater detail down the track but for now, I just wanted to reach out, say hi and explain my recent absence. I won’t be responding to comments for a while but just know that I truly appreciate all the love, support and kindness that comes my way. See you soon and God Bless.
.
Love Josh. 💪🏼 #love #joy #peace

We really hope the big Australian makes it to the Olympia as if he comes in the condition as he was in Spain, he should have no problem placing in the top 5. 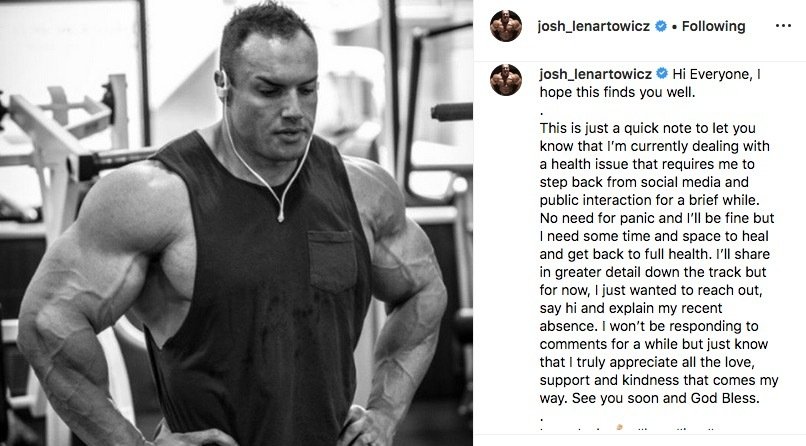 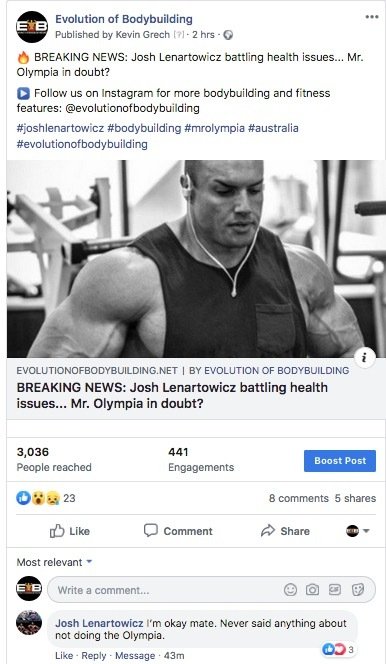