Juliette Maria Suzanna Bergmann was born on November 30, 1958 and is a champion Dutch female bodybuilder, the 2001 Ms. Olympia. 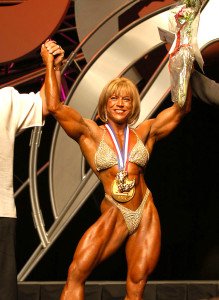 Bergmann was born in Vlaardingen, Netherlands, from a Dutch mother and an Indonesian father. During her childhood she lost two brothers, causing much grief to her mother, who laid a larger responsibility on Juliette, the oldest child. That period in her life, she believes, made her a disciplined and responsible person.

After finishing school she went on to study financial management, journalism and fitness training. She got married (married name – Meijer) in 1975, but divorced in 1985.

She began training to lose weight in 1981, but didn’t become a bodybuilder until 1983, after attending a female bodybuilding contest where she got a very good impression of the competitors. By the end of that year she would enter her first competition, where she placed first.

In 1984 she won the Dutch National Championship and repeated as champion in 1985. Later that same year she qualified for the World Amateur Championship, where she achieved first place. By the end of 1985 she competed in her first Ms. Olympia, but did poorly with a 14th placing. However, she achieved significant success in 1986 by winning the Pro World Championship, placing second (by one point) in the Ms. International, and sixth in the Ms. Olympia.

After 1989 she planned to take a year off from competition and compete again in 1991, but her plans were derailed when she suffered a badly broken ankle. She was not able to train seriously again for a couple of years.

Bergmann has been cited as the “Grecian Ideal” wherein biceps, calf and neck measurements are similar as are waist and thigh measurements.

In January, 2009, Juliette was inducted into the IFBB Hall of Fame. 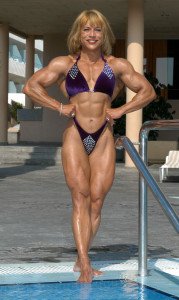