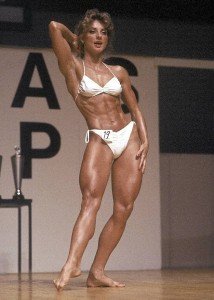 The significance of Kike Elomaa’s impact on the sport of women’s bodybuilding came by way of a relatively short but critically important career that not only elevated the sport’s popularity in her Finnish homeland, but helped introduce the fledgling activity to the entire European continent.

Stringing together a quartet of contest victories in 1981 that culminated in a win at the IFBB Ms. Olympia, Elomaa accomplished a grand slam of sorts by also winning the Finnish, European and World Games championships, which brought her immediate worldwide recognition.

Far more significant than her contest placements were Elomaa’s radiant elegance and unmistakable European class and charm that ignited such notable interest in women’s bodybuilding. Elomaa’s successes in life continued after her competitive bodybuilding days, as she enjoyed a popular singing career in her homeland.

At one point, she was chosen as Finland’s most popular female. A recent recipient of the IFBB’s President’s Gold Medal for her work in supporting the sport of bodybuilding, Elomaa has also lent her name to the successful Kike Elomaa Fitness Championships held annually in Finland.
On 17 April 2011, Elomaa was elected to the Finnish parliament for 2011–2015, representing the True Finns.