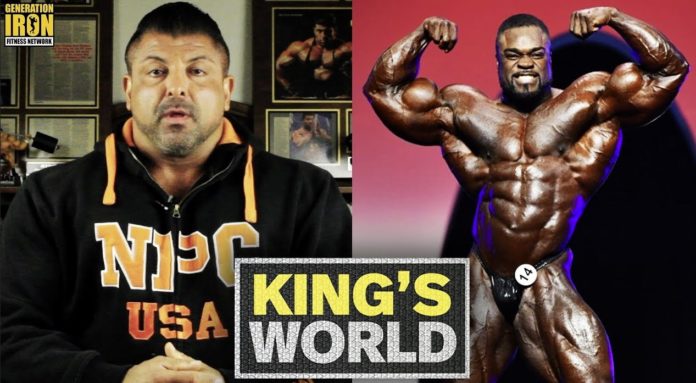 King Kamali has always been honest with his opinion on everything that has to do with bodybuilding.

King Kamali gets real about the quality of physiques and results from the Men’s Open Olympia 2019.

KING’S WORLD – is a digital series starring King Kamali providing the honest truth on all things bodybuilding. Combining King Kamali’s patented blunt opinions with some tried and true informative facts, King’s World aims to expand your mind outside of the usual “rules” behind bodybuilding. Honest opinions, valuable facts, and a whole new way to look at bodybuilding. New episodes air every Tuesday.

Before the Mr. Olympia 2019 competition started, King Kamali sat down with Vlad Yudin for an interview and gave his opinion about the extremely shifted line up for the Men’s Open division. Due to missing athletes such as Big Ramy, Shawn Rhoden, and Phil Heath – Kamali believed that there will always be an asterisk next to the Olympia 2019.

Now that the Olympia weekend has past and we’ve all had time to reflect on the results and the show put on display by the hard working athletes representing the best of the best on stage – King Kamali has put together his official and honest review of the Men’s Open Olympia 2019. Were Kamali’s predictions true? Did this year’s big event feel to have an asterisk that will forever be mentioned when looking back at the history books? King Kamali goes into detail about his honest thoughts from everything between the judges’ ultimate results to the quality of the physiques standing on stage.

This is one of the more honest looks you’ll get from a man who has no qualms keeping it blunt and honest. Kamali even gives some suggestions for the top competitors next year when we get to the Olympia 2020. Nothing is off limits in the latest episode of King’s World.