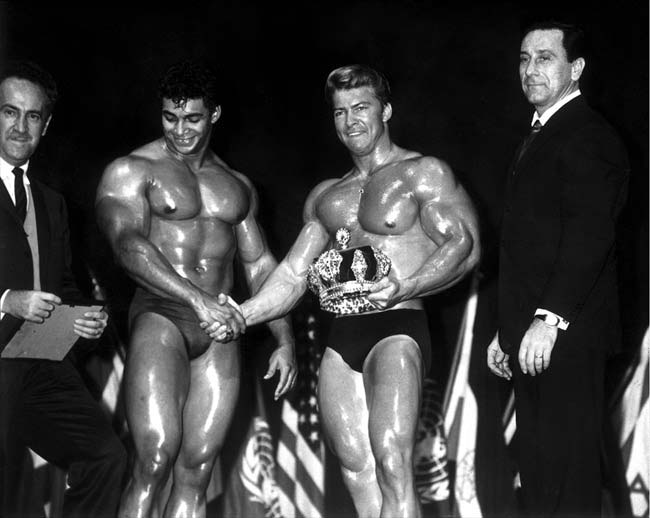 Larry Scott, nicknamed “the Legend”, born on October 12, 1938 in Blackfoot, Idaho is an American former IFBB professional bodybuilder. He won 1965 Mr. Olympia and the 1966 Mr. Olympia competition. Larry Scott passed away on 8 March, 2014.

Larry Scott, “The Legend”, established and personified bodybuilding’s beach Adonis image, and duly became the sport’s Golden Boy after winning the IFBB Mr. America title in 1962 and the IFBB Mr. Universe in 1964. He was the first-ever IFBB Mr. Olympia in the contest’s initial two years of life, 1965 and 1966.

Joe Weider’s brainchild of a competition got the perfect first-time winner in Larry. Of all the Hall of Fame inductees, perhaps Scott started with the least raw potential.

Told he was too narrow-shouldered (a condition then considered insurmountable) he persevered and packed on prodigious mounds of delt muscle which, coupled with the greatest arms in bodybuilding, enabled him to present front double-biceps shots that worked up a crowd like no other.

Before claiming the Mr. Olympia title, Scott took Mr. America in 1962, the Mr. Universe title in 1964, and had a minor role in the 1964 movie Muscle Beach Party. Scott was also a popular physique model during the early to mid 1960s, working for such famous photographers as Bruce of LA and Don Whitman, of Western Photography Guild. His “posing strap” material for Pat Milo (known professionally as simply “Milo”) is today considered fine art. 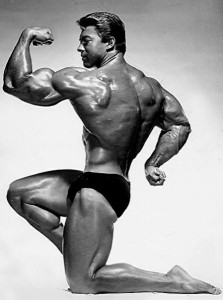 It was Milo who introduced Scott to a wide, appreciative audience and helped him hone his posing and photographic persona: that of the “boy next door.” Larry regularly appeared in all of Joe Weider’s bodybuilding magazines, including Mr. America and Muscle Builder, and he also figured prominently in Demi Gods, Muscleboy, and The Young Physique.

Witnesses still say that the audience reaction to his 1966 IFBB Mr. Olympia entrance was the most vociferous and emotional ever seen at a bodybuilding contest. Scott’s retirement at the age of 28 sent shock waves throughout the sport. 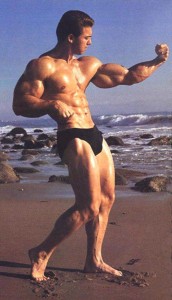 From 1960 until his retirement from competition in 1966, Scott was bodybuilding’s top superstar. Bodybuilding magazines soon began capitalizing on his image, but Larry – an IFBB athlete – wrote exclusively for Joe Weider’s publications. Larry’s popularity completely eclipsed all other bodybuilders of his time, including such famous personalities as Freddy Ortiz, Chuck Sipes, Dave Draper, Leo Robert, Harold Poole, and Sergio Oliva.  has since become known as “Larry fever” and reached its apex at the 1966 Mr. Olympia competition, where Larry defended his title and once again took home the crown (literally, since the prize was $1,000 and an actual crown).

Scott’s retirement at the age of 28 sent shock waves throughout the sport. But Scott had other priorities (a second marriage), and after two Olympia wins, he’d done all he could do in competitive bodybuilding.

But Scott had other priorities (a second marriage), and after two Olympia wins, he’d done all he could do in competitive bodybuilding. A devout Mormon, Larry lives in Salt Lake City, where he runs his own bodybuilding advisory company.