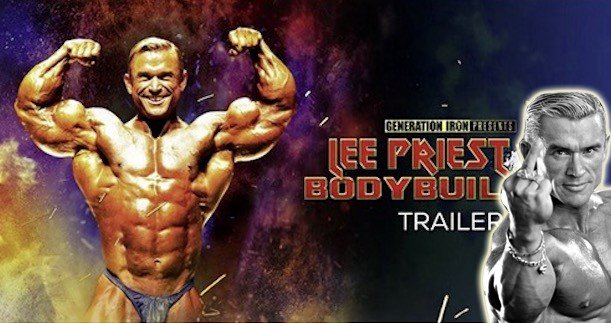 Lee Priest criticizes his own documentary made by Generation Iron.

Lee Priest is not a person to keep silent on any matter related to bodybuilding or life events in general.

In a recent post on his official Facebook and Instagram page, Lee Priest vented his frustration in towards the documentary Generation Iron made about himself called “Lee Priest vs Bodybuilding” .

According to Lee Priest, he was not happy with how the documentary was made in every aspect.

Generation Iron failed to listen to Lee in regards the name of the documentary “Lee Priest vs Bodybuilding”, he hated it.

Lee Priest went on to point out that Generation Iron failed to show any of his pro shows and interviews his closest friends made were all cut out.

Regarding loyalties, Lee Priest said that he is not making any extra money after the film was released, he was just paid $7,000.

Evolutionofbodybuilding.net contacted Lee Priest and he had this to say “This isn’t about money. They could of paid me a million dollars, it still wouldn’t change my review about it. If your going to do something do it right, and maybe listen to the guy you’re doing it about.”

My review of my movie documentary. Well you know I hate most generation iron movies. So as much as I tried to like mine it’s shit. Yes it’s shows a little into my life my way of thinking etc. but still DOSENT get to the heart of me who I am. They were more trying to make this LEE VS BODYBUILDING shit title I also told them I hated it. They never showed one pro win only showing my Mr Universe win. Having Jay in ok was nice but we never been close he dint know me says I’m selling my trophies must need money then next scene goes back on that saying I can do what I like for the fans. You interview 3 close mates I’ve known forever 2 I train with and they didn’t even get in the movie. So really the best parts of this ended up on cutting room floor. No I get no royalty from this movie being done. I got 7,000 for it was going to be 5,000 had to pull teeth to get extra 2 lol. Yes I know they making a lot. It wasn’t about the money it was about putting out my story which sadly they failed. – Lee Priest. 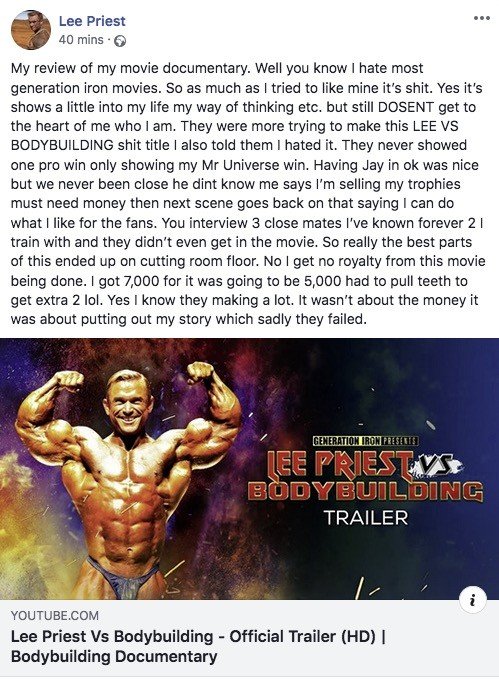