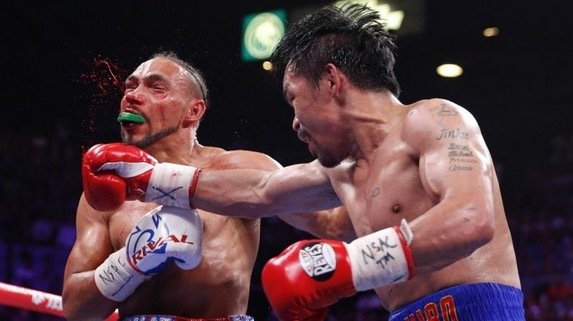 Not many 40-year-old boxers in the long and storied history of this sport who have been able to keep the kind of pace Manny Pacquiao kept Saturday at the MGM Grand in his WBA welterweight title fight with Keith Thurman.

Pacquiao, handed Thurman his first defeat, taking a split decision. Judges Dave Moretti and Tim Cheatham had it 115-112 for Pacquiao, while Glenn Feldman had Thurman 114-113.

The 40-year-old Pacquiao out-dueled unbeaten champion Keith Thurman over 12 all-action rounds to capture the WBA title in a thrilling split decision. The instant classic saw two judges score the fight 115-112 for Pacquiao while the third had it 114-113 for Thurman.

Pacquiao (62-7-2, 39 KOs) recorded a knockdown in the opening round on a beautiful right hook that proved to be the difference as it helped him steal Round 1 and edge out Thurman (29-1, 22 KOs) in a fight-of-the-year contender that saw both fighters compete at an insane pace.

Comments from the fighters

“I’m not the kind off boxer to be a talker, just promoting the fight,” Pacquiao said. “I think we did a lot off things [to promote the fight]. He did his best, and I did my best to make the people happy.”

“I really loved the fans. Thank you so much for coming here and witnessing the fight,” Pacquiao said. “I’m sure you were happy tonight because you see a good fight. Even though Thurman lost, he did his best. He’s not an easy opponent. He’s a good boxer, strong. I think I’m just blessed tonight.”

“I knew it was just too close. He got the knockdown so he had momentum in Round 1,” Thurman said. “I want to thank the fans. I want to thank everybody for coming out. This was a beautiful night of boxing. Manny Pacquiao is a great, truly great champion.

“I wish I had a little bit more output to go toe to toe. I felt like he was getting a little bit tired, but he did have experience in the ring. My conditioning, my output was just behind Manny Pacquiao. It was a great night of boxing. I’d love a rematch.”