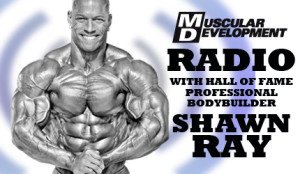 An new addition to evolutionofbodybuilding.net has been added today.

I decided to make it easier for readers to listen to the great Muscular Development bodybuilding talk shows hosted by the one and only Shawn Ray. Easy links are on every page of the site.

As well, last weekend Dexter Jackson won the Tijuana Pro show. It was a easy victory for him as nobody seemed to match his class.

The biggest news of the week so far for evolutionofbodybuilding.net is that Shawn Ray will be interviewing Bob Paris on the MD Radio show. Bob is to me what bodybuilding should be and I have said it a number of times. It is a real shame that Bob is no longer in the sport, but I am really happy that he accepted a interview with Shawn.