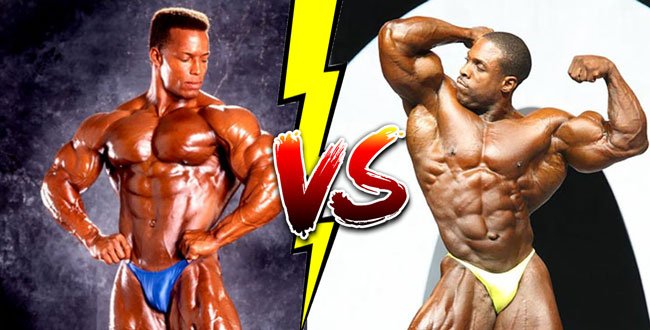 Melvin Anthony Jr. and Shawn Ray have trading words over footage from 1999 when Melvin was prepping for the NPC USA’s.

In 1999, Melvin Anthony Jr. was prepping for the NPC USA’s, a contest that he would win and earn his pro card.

Melvin recorded his entire prep and eventually released it on DVD. The title of the DVD was “Melvin Anthony: Marvelous“.

The heated debate between Melvin and Shawn started over a segment on the DVD that shows Melvin practicing his posing in front of the legendary John Brown, Milos Sarcev and Shawn Ray.

In this particular segment, Melvin is getting tips from John Brown and even Milos. As the posing session continues, Shawn Ray also gives some tips to Melvin in regards to his posing.

Fast forward to July 2020, in a interview with Dave Palumbo, Melvin was asked by Dave if Shawn every helped him pose, and Melvin immediately denied this, saying that Shawn Ray never helped him pose.

Melvin explained that John Brown was both his and Shawn Ray’s posing coach.

After a year (5 July, 2021), Milos Sarcev published a video on his official Instagram page, with no intention to start any controversy. The video was the segment from Melvin’s 1999 video that included Melvin, himself, Shawn and John Brown.

Immediately viewers started to comment and tag Melvin, pointing out that Shawn did actually help him with his posing. Melvin did not deny that Shawn gave him some tips, but at the same time he refused to acknowledge Shawn helped him in any other way.

On the same day, Shawn Ray published a video on his official Instagram page labeling Melvin Anthony as a “fake” and “hater”, in response to his comments on Milos Sarcev’s Instagram post.

Shawn’s caption to his video was This is what a Hater & a Liar sounds like. How to deal with Haters: “Remind yourself that comments from a hater are a reflection of them and aren’t really about you…”

Melvin hit back at Shawn on a recent episode of Dave Palumbo’s, Iron Debate, published on 9 July, 2021. Milos Sarcev was also on the show, and he explained that this debate started when he innocently published the same video on his Instagram page.

Melvin took advantage of the situation to throw more mud at Shawn, making it obvious that he does not see eye to eye with him. Melvin does not consider Shawn as a friend and he has pointed this out in a majority of his interviews.

To make this a fair playing field, Shawn Ray should now be given the same opportunity to reply to these accusations on Dave Palumbo’s Iron Debate.

On a number of occasions, I have witnessed Shawn Ray give posing tips to amateur and pro bodybuilders. This is what Shawn Ray does. He knows what the judges want to see, and he tries to pass this knowledge to the athletes. If he is at a competition and notices a athlete can improve in the next round, he will tell him, if the opportunity arises.

There was nothing wrong with Shawn giving posing tips to Melvin. Shawn knows very well, John Brown is the legendary coach for posing and his mentor. The difference is that in 1999, Shawn was already competing as a pro for 12 years and Melvin was an amateur prepping for the NPC USA’s. Shawn had vast stage experience and there was nothing wrong with him passing his knowledge to Melvin.

2020: Melvin Anthony is interviewed by Dave Palumbo and denies that Shawn Ray ever helped him.

5 July 2021: Shawn Ray labels Melvin a “Fake” and “hater” in response to comments by Melvin on Milos Sarcev’s Instagram post.

9 July, 2021: David Palumbo invites Melvin and Milos on “Iron Debate”. Melvin again denies that Shawn helped him with his posing. Milos explains that he published the video on his Instagram page with no bad intentions.

The same video that Milos Sarcev published on 5 July, 2021. This is what sparked the debate between Melvin and Shawn 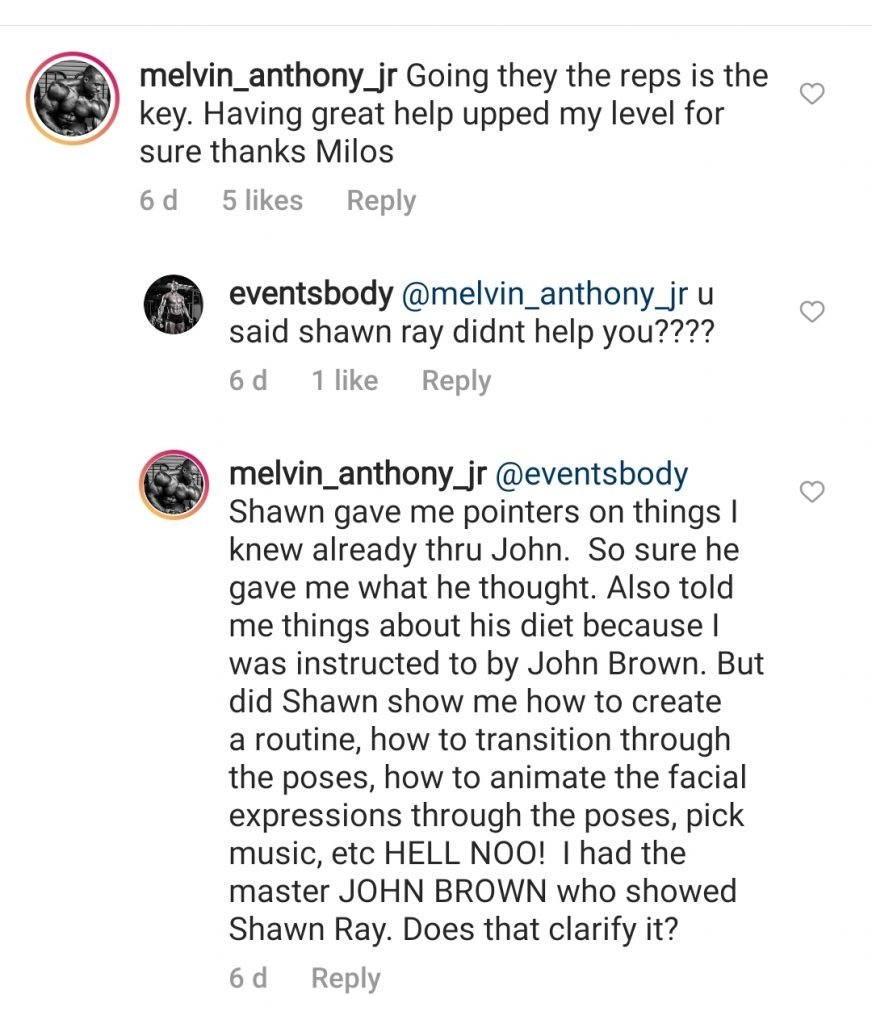