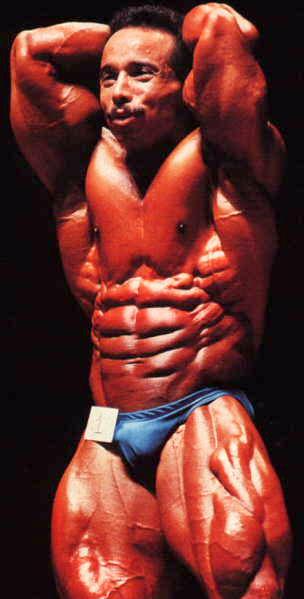 Mohammed Benaziza (Arabic: محمد بن عزيزة‎)  was born on 1959 in Algeria  and died on 4 October 1992, the same evening after he won the IFBB Grand Prix in Holland.

Mohamed Benaziza was a soccer player in his childhood in France, and started to work out while continuing to play soccer. He finally chose bodybuilding and started competing as an amateur in France. He won his first competition in Spain (under 75 kg-category) and after that he continued to win small prizes until his first participation in The Night of Champions in 1990, which he won. On that occasion, he was nicknamed the Killer of Giants by Joe Weider when he beat the much larger Dorian Yates who ended up placing second.

It is reported that he had earlier complained of sickness and shortness of breath, but refused several times to go to a hospital.  His death led to the end of the career of his personal friend IFBB Pro Steve Brisbois. Benaziza was 33 years old and was just at the start of brilliant run in his bodybuilding career.