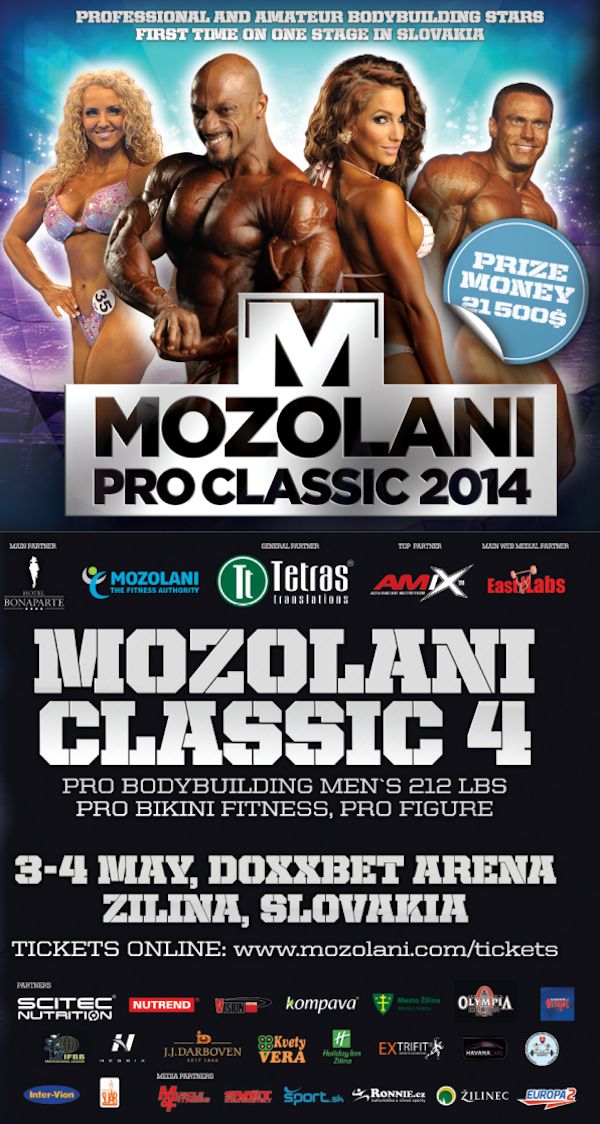 After three highly successful Mozolani Classic events, the organizers have decided to raise the bar another level and put on a show, the like of which has not yet been seen here. An international tournament will take place in Slovakia for the first time, and in addition the Slovak amateur elite will compete in their categories at the two-day Mozolani Weekend event (May 3 and 4, 2014). The DOXXbet Arena in Žilina will provide the competition venue.

Airport transfers will be arranged for competitors in the PRO category at designated intervals at the organizer’s expense.

information for professionals and amateurs:

History of the event

MOZOLANI CLASSIC 1
This was held on May 9, 2010 at the Holiday Inn conference hall in Žilina. Competitions were held in the men’s bodybuilding, men’s classic bodybuilding and women’s bodyfitness events. Štefan Havlik was crowned overall winner and the VIP guest at the event was the professional Kai Greene.

MOZOLANI CLASSIC 2
This was held on October 20, 2012 at the sports hall on Rosinská cesta in Žilina. Competitions were held in the men’s bodybuilding, men’s classic bodybuilding and women’s bikini fitness events. Rastislav Solár and Karina Antovská were crowned overall winners.

MOZOLANI CLASSIC 3
On the first day, April 27, 2013, competitions were held in the men’s bodybuilding, men’s classic bodybuilding and women’s bikini fitness events. Marian Čambal and Karina Antovská were crowned overall winners. On the second day competitions were held in the women’s fitness and bodyfitness and in children’s fitness events. The VIP guests were the reigning professional champions – Phil Heath (Mr. Olympia) and Flex Lewis (Mr. Olympia 212).

Mozolani Pro Classic
Žilina is the fifth largest city (population 85,000) in Slovakia, and its rich history and fine architecture blend in with a modern and dynamic development. The first written record of Žilina dates back to 1208. Its historical development, traditions and contemporary history undoubtedly rank it as one of the most important cities in the country, and it is an important economic, administrative and cultural center in Central Slovakia. The most important historical monuments in Žilina are Mariánske námestie, which is the only square in Slovakia to have preserved its Renaissance arcades (‘laubne’ – arches), Budatín castle and the Cathedral of the Holy Trinity. The Váh, the longest river in Slovakia, flows through Žilina. The city is a center of industry, transport, education and culture, and since 1960 it has been home to the University of Žilina. In 1996, the city became the seat of the Žilina region and therefore gained equal footing with other major Slovak cities. The major auto manufacturer, KIA, opened a manufacturing plant near the city in 2006. Žilina and its surrounding area is a great tourist destination, the most popular tourist area being Vrátna dolina in the Malá Fatra, which is excellent hiking and skiing country. Žilina is a sporting center: the MŠK soccer club has won the Slovak championship on six occasions and the MsHK DOXXbet hockey club, which plays its home games at the stadium which will host the Mozolani Classic Pro 2014, has won one Slovak title. The most famous current athlete from Žilina is the professional cyclist Peter Sagan.