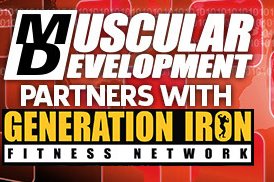 Muscular Development and Generation Iron Fitness Network are teaming up to develop original programming and content for bodybuilding and fitness enthusiasts worldwide.

The brands are joining forces to create new digital shows, docu-series and original films for the GI and MD platforms with participation of industry players. As original programs grow in popularity, both companies recognize the importance of integrating and delivering bodybuilding topics to the masses.

In addition, Muscular Development magazine will run a monthly Generation Iron column. MD readers will get a chance to learn more about the Generation Iron message of bridging the gap between entertainment and bodybuilding by delivering a behind-the-scenes lifestyle approach. In upcoming months, there will also be exclusive interviews and cover stories with GI athletes like Kai Greene.

“I am excited for the opportunity to work with Vlad Yudin and Generation Iron Fitness Network,” said Muscular Development Publisher Steve Blechman. “I have the utmost respect for Vlad as a producer and the director of ‘Generation Iron,’ a 2013 documentary film covering the world of bodybuilding that was one of the top five documentaries at the box office. Vlad’s expertise and reputation in the film and video production are second to none!”

Steve continued, “The goal of the partnership between Muscular Development and Generation Iron Fitness Network is to provide brand new, high-quality original programming inside the world of bodybuilding and fitness that you can watch right on your computer, tablet or smartphone. And I look forward to working closely with Vlad on developing better content, programming and contest coverage than ever before.”

Vlad Yudin said, “As the Generation Iron Network is growing and expanding tremendously, we are very happy to begin our work with Steve Blechman and the MD team. Muscular Development is a world recognized brand and the most trusted name in bodybuilding. By combining our resources we will spread our message of combining bodybuilding with entertainment.”