The National Physique Committee (NPC) has just published a detailed press release stating their plans for 2021.

The NPC made it a point to thank all the athletes for fighting through these difficult times and still manage to make it on stage.

The NPC are happy to announce that the numbers of competitors are increasing for the remaining shows for 2020.

Media exposure was another important subject in the press release.

New media channels by the NPC are going to be created to expand their brand.

The new projects by the NPC include 3 new websites and 12 social media channels.

The promotion of athletes looks to be the main goal of the NPC.

The NPC have confirmed that NPConline.com will be the ONLY and OFFICIAL website where you can find a contest gallery for every single event.

The NPC also announced that in order to increase and maximize the visibility of all their past and future videos they will be partnering up with additional video, social and streaming platforms.

YouTube will most probably be the hunting ground for the NPC to take advantage of popular media promoting the sport of bodybuilding.

Further announcements about the NPC’s media development and partnerships will be made at the 2020 NPC Nationals and 2020 Mr. Olympia.

We want to thank all of the NPC, NPC Worldwide and IFBB Professional League competitors who found a way through these tough times to step on stage and continue their passion to be the best in their respective division. Despite all of the trials and tribulations that we are facing the 2020 NPC North American did record competitive numbers with over 2k competitors. As we approach the 4th quarter of 2020 the competitive numbers are rising and we look forward to seeing all of the new IFBB Professional League Pro’s that earn a Pro card in the upcoming National Physique Committee and NPC Worldwide Pro Qualifiers.

That being said when the pandemic began, we did not stop working, we did the complete opposite. We started looking for ways to increase the visibility of all our athletes and increase the visibility of our brand. I am happy to report that in addition to npcnewsonline.com, ifbbpro.com , npcnewstv.com and npcfitbody.com we will be launching “3” additional websites and 12 new social media accounts. We will have so much additional content that all of these sites and social media accounts will be populated on a daily basis.

We look forward to featuring the competitive journey of the athletes of the NPC, NPC Worldwide and IFBB Professional League on a regular basis.
Currently the NPC News Online You Tube channel has over 8k videos and we expect our video numbers to increase drastically due to the expanded contest coverage and new unique programming supplied by J.M. Manion.

In order to increase and maximize the visibility of all our past and future videos we will partnering up with additional video, social and streaming platforms.
In addition to that we will be increasing contest coverage of all events in 2021 and we will be the ONLY and OFFICIAL website where you can find a contest gallery for every single event.

We want you to know that we appreciate our athletes and this is just the beginning. Further announcements about our media development and partnerships will be made at the 2020 NPC Nationals and 2020 Mr. Olympia. 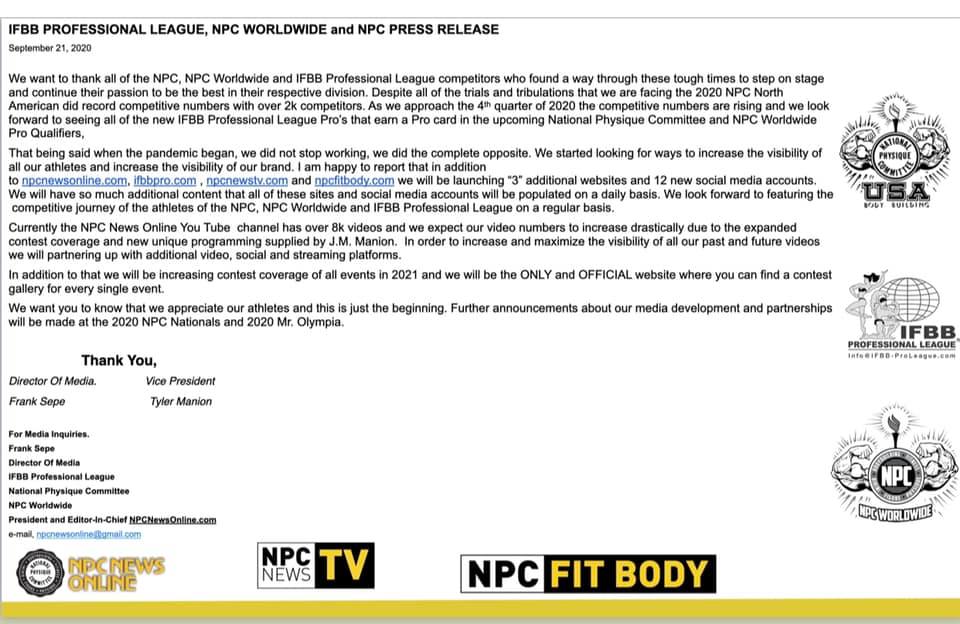