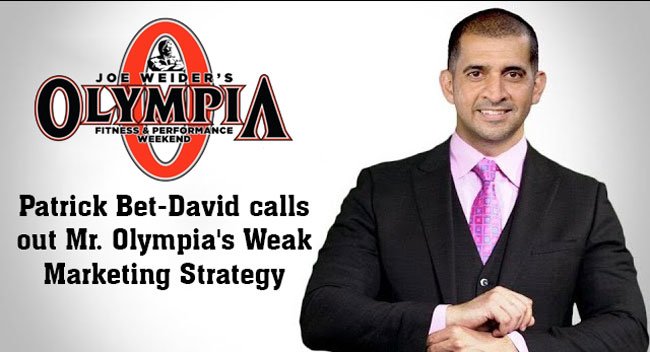 The king of marketing, Patrick Bet-David has called out the Mr. Olympia marketing team for their very weak marketing strategy, focusing on YouTube.

Patrick Bet-David is a very successful businessman and this is thanks to his incredible knowledge in marketing.

What many might not realize is that Patrick is also a bodybuilding fan.

Months before the 2020 Olympia, Patrick managed to interview some of the biggest names in the sport of bodybuilding. A total of ten interviews managed to generate over 20 million views.

Read More: The best interviews related to the bodybuilding world by Patrick Bet-David.

With over 20 million views promoting the sport of bodybuilding and mainly the Mr. Olympia brand, it seems the Mr. Olympia marketing team did not take advantage of this great opportunity.

In a recent video with Ricardo Aguilar, Gerard Michaels and surprise guest Phil Heath, Patrick started the episode by talking about the Mr. Olympia.

Patrick started by revealing that he got Phil Heath and himself in some hot water when he mentioned an idea about organizing a bodybuilding event, during an interview with Phil Heath over a year ago.

Patrick went on to reveal that ‘the powers that be’ were not happy with Phil Heath talking about these kind of competitions since he represents the Olympia brand.

Patrick went on to discuss the Olympia brand and the way they are handling it’s marketing.

“Just a crazy thought to throw out there,” Bet-David said. “There’s something about the Mr. Olympia that needs competition. I don’t know why, I just feel it needs somebody to ruffle the feathers a little bit. I think it’s a little bit too political. I’d love to see somebody come out there and stir the pot…

“I don’t even know if there is a big audience for bodybuilding or not,” he continued. “Mr. Olympia, how big of a brand is that? Massive brand. Arnold, Lee Haney, they have footage from everywhere. How many subscribers do you think Mr. Olympia’s YouTube channel has? … I don’t know what they’re doing over there.

“Here’s a brand, who the hell is running this thing that can’t even figure out how to get more than 31,000 subscribers? If I’m a bodybuilder representing a brand like that, you’ve got to do a better job marketing,” Bet-David continued.

“All the footage they own, they don’t even know how to market a brand like this. Anyway, I hope the new guy does something about it, Jake Wood, I’ve heard good things about him. But I think there needs to be some kind of a shake up there.”

There are many ways that the Olympia brand can be improved in regards to marketing. Patrick raised a number of good points.

The Olympia’s marketing team should take this criticism seriously and try to improve their brand.

Another example is 2020 Mr. Olympia, Big Ramy. Where is he? Since he won the title, he has rarely been seen on social media or at any event promoting the Olympia brand.

The Mr. Olympia winner (Big Ramy), should be a walking marketing machine.

Being such a successful businessman, Patrick can easily organize a contest that would rival the Mr. Olympia or any other competition, such as Dwayne Johnson’s Athleticon, if it ever happens.

It is a well known fact that to compete in the Mr. Olympia, the athlete must be a paying member of the NPC/Professional League.

The Olympia Weekend organizers boasts a grand total of $1 million in cash prizes to be shared between all the divisions. The Mr. Olympia winner would win a total of $400,000.

Patrick Bet-David is suggesting that if he had to create a bodybuilding event, with the best bodybuilders in the world competing, he would offer $1 million for the winner.

This would surely test the loyalty of the athletes to the NPC/Pro League, with such cash prizes being available to be won.

Bodybuilding is changing in the modern era and it becoming evident that the athletes want to compete for the highest cash prizes with little effort.

Gone are the days when a bodybuilding competitor would compete in five or more shows in a year, trying to win as many shows as possible. The athlete has a goal to win one show to qualify for the Mr. Olympia.

Evolutionofbodybuilding.net believes that if Patrick Bet-David had to build a team with the best bodybuilding promoters in the sport from the past and present, he can succeed in creating a super event to rival any competition.

In 1990, WWE’s Vince McMahon changed the sport of bodybuilding drastically when he created the WBF (World Bodybuilding Federation).

Offering lucrative contracts convinced a number of high profile athletes to leave the IFBB and join the WBF.

Some athletes were paid over $400,000 per year just to join the WBF. No bodybuilder made this amount of money in the 90’s, just to join a federation.

Read More: Gary Strydom talks about the WBF… the controversies, steroids and money

This forced the late Joe Weider to offer better paying contracts to the athletes that remained.

Amid a steroid scandal impacting the WWE and WBF, Vince McMahon decided to shutdown the WBF after only two years.

Regardless of how long the WBF lasted, its creation changed the world of bodybuilding, proving that the goal for the majority of athletes is to make as much money as possible in a short period of time.

Phil Heath was a special guest on the show. Patrick suggested that Phil should have his own Podcast, assuring him that it would be very successful.

Patrick also asked Phil if he will be competing at the 2021 Mr. Olympia, Phil answered “my phone is on, my phone still works”, expecting a call from the Olympia organizers.