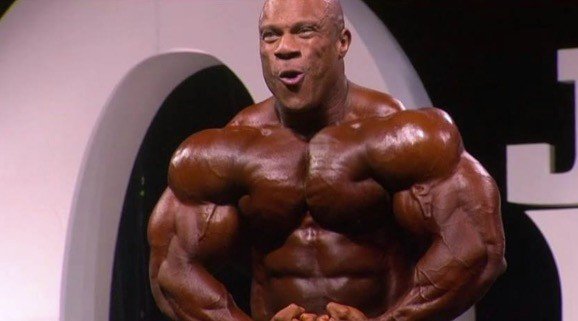 7X Mr. Olympia Phil Heath was just recently interviewed by Flex Magazine. With an exclusive contract with AMI, the owners of Flex Magazine, it is very rare to hear what Phil Heath has to say about his plans for 2018 and how he will be preparing for the 2018 Mr. Olympia.

The usual question of how Phil compared his win in 2017 to 2016 was asked and Phil made a valid point of explaining that there is no real consistent rival. Giving an example of the Ronnie Coleman vs Jay Cutler years, Phil believes he has no consistent rival other than the Kai Greene years.

“I think what we’re going to see is a five-headed monster. As of right now, I don’t know who the challenger will be next year. What would solidify someone being a contender would be whoever dominates the post-Olympia schedule” – Phil Heath

Shawn Rhoden fell from second to fifth and Phil Heath said that he surely was not pleased with that.

Phil also went on to say that he should be getting an indication of his main rivals after the Arnold Classic.

Getting on the subject of Big Ramy, Phil Heath does not see him as the only threat as William Bonac was beating Big Ramy on the Friday during pre-judging.

Regarding Shawn Rhoden, Heath thinks that Shawn had to eat his own words as during the build up to the 2017 Olympia as Rhoden was vocal about his chances on winning the Olympia. He even signed a poster as 2017 Mr. Olympia, but this did not bother Phil Heath as when Kai Greene did the same thing.

Regarding if he will let fans in on his prep for 2018, Phil said that he took the advice of bodybuilding historian Peter McGough in 2017. Peter told Phil to buckle down just as Dorian Yates used to. Dorian used to disappear and arrive on the day and dominate the sport. In his 2017 prep, Phil did just that. Regarding 2018, Phil will most probably continue with the same game plan, but he mentioned that he will do some fun Youtube videos for the fans.

On his legacy, Phil Heath said that he only can be called the greatest of all time if he wins nine Olympia titles.

“No matter what happens to me from this day forward, I’ve tied Arnold Schwarzenegger,” is something. No one else can say that except Coleman and Haney. That’s it. I take that with great pride.

2018 will be an interesting year as Phil Heath is recovering from two major hernia operations and he will surely be applying a different game plan to be 100% by the time he steps on stage at the 2018 Mr. Olympia.