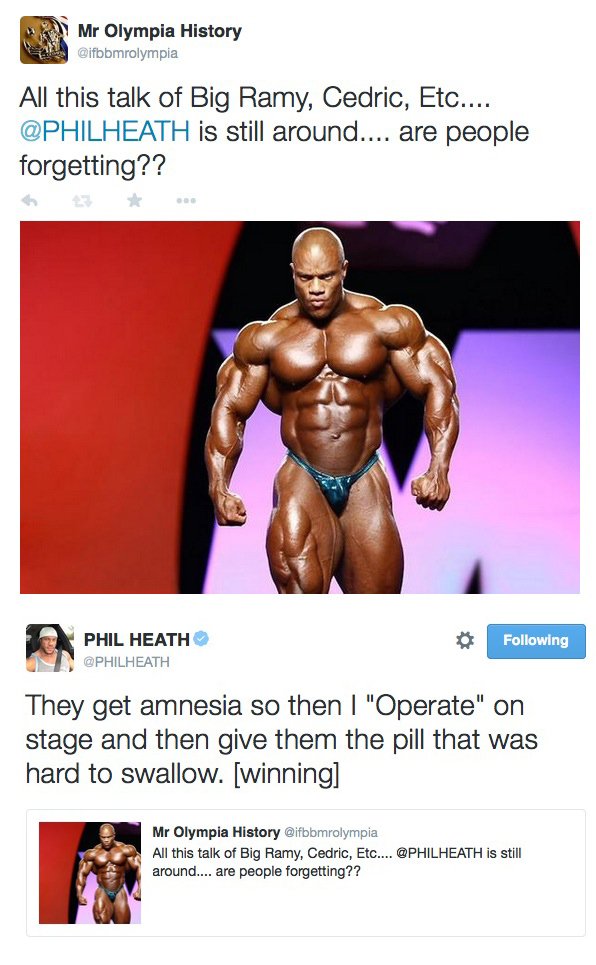 With all this talk about Cedric McMillan and Big Ramy, everybody (including us) seem to be forgetting about the current 4X Mr. Olympia Phil Heath.

Yes, Cedric has a fantastic physique and Big Ramy is a freak of nature. But with all this talk, you never once hear Phil Heath talking about his rivals.

As well, we must not forget Kai Greene, who till now is Phil’s number one rival.

Earlier today, we used our Twitter account (@ifbbmrolympia) to send a message to Phil and he quickly replied sending a heavy reminder to all his rivals that he is still around and working hard to win his 5th Mr. Olympia title.

We wrote “All this talk of Big Ramy, Cedric, Etc…. @PHILHEATH is still around…. are people forgetting??”

Phil quickly replied “They get amnesia so then I “Operate” on stage and then give them the pill that was hard to swallow. [winning] “

If Phil Heath’s rivals think he is just going to sit back and let everybody just come in and take his title… they are in for a big surprise!

Phil is here and it looks like he will be for a long time.