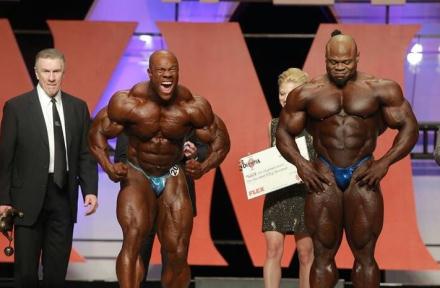 Phil Heath won his third Mr. Olympia title on Saturday evening in what would be one the greatest Mr. Olympia competitions in the history of the sport.

Many local bodybuilding fans stayed up during the night to watch the live feed on the internet to see who would be the 2013 Mr. Olympia.

The 49th edition of the contest would have three Mr. Olympia winners on the stage competing against each other for the coveted prize (Phil Heath, Dexter Jackson and Jay Cutler). 20 of the best bodybuilders in the world battled each other to try to take the title away from holder Phil Heath. At the end it would be Phil Heath who walked away with the Sandow trophy and a cheque for $250,000. Phil accepted his award with a lovely tribute to his wife, who was diagnosed with breast cancer earlier this year. His candid speech left even the biggest muscle men a little teary-eyed.

Four time Mr. Olympia winner Jay Cutler returned after missing last year’s competition due to a bicep injury. He was not near the condition he was in when he battled Ronnie Coleman for the Olympia title, but a sixth place finish was a fair result for the former champion. This could possibly be the last time we see Cutler competing at such a high level.

Kai Greene placed a close second the second year in a row, As Kai came in much bigger than Phil, it was Phil Heath would had the edge with a more perfect appearance.
Dennis Wolf placed third. Dennis was the surprise of the weekend as he presented a much bigger and defined physique compared to previous years. He will surely be a in the top three in the coming years.

This article was originally published by me on www.maltatoday.com.mt

More information regarding the 2013 Olympia weekend and the history of bodybuilding can be found on www.evolutionofbodybuilding.net.