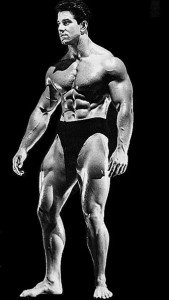 Showing athletic interests early in life, Reg Park dedicated his teenage years to excelling in football. He had no specific interest in bodybuilding until age 16 when he met muscleman David Cohen. Upon learning that Cohen lifted weights at his friend’s house, Park joined in out of curiosity. Park’s legendary physique would begin to grow from barbells, dumbbells and a simple chinning bar.

During his national service he was a Physical Training Instructor in Singapore. Upon discharge from the army in 1948, he witnessed his first physique contest; the inaugural NABBA Mr. Universe contest, in which John Grimek edged out Steve Reeves in controversial fashion. It was this contest that inspired Park to compete himself.

After one year of hard training, Park earned the title of Mr. Britain in 1949. He then subsequently spent six months in the United States (thanks to a gift from his parents). There, he met up with publisher Joe Weider, who began to feature the Englishman prominently in his muscle magazines. The next year, Park was runner-up to Steve Reeves in the 1950 NABBA Amateur Mr. Universe in London (also a close contest).

After a second full year of training, Park broke what had been an American monopoly on bodybuilding titles by winning the 1951 National Amateur Bodybuilders Association (NABBA) Amateur Mr. Universe. He cemented his superstar status by winning the 1958 AND 1965 NABBA Pro Mr. Universe titles. Standing 6’1″ and with a top weight of 250 pounds, Park was known for his muscular mass and was a forerunner to modern bodybuilding. Park was also renowned for his strength, which he often demonstrated in contests and strongman exhibitions. He is on record as the first bodybuilder to bench press 500 lbs. As an actor, Park made five films — all Italian Hercules sword and sandal. 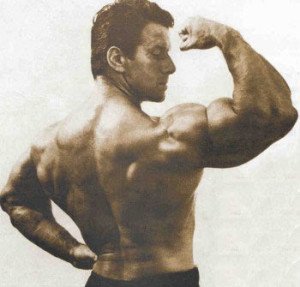 Up to the time of his illness in 2007, despite being in his seventies, Park continued to train clients at the Morningside Virgin Active Gym in Sandton, South Africa. He has been featured in many fitness and bodybuilding magazines, and has also appeared on the cover of Muscle & Fitness magazine. He was inducted into the International Federation of Bodybuilders (IFBB) IFBB Hall of Fame’s first ballot in 1999.

With his wife Mareon of 55 years at home and Jon Jon by his side, Park died on 22 November 2007 in his home in South Africa, after an eight month battle with metastatic melanoma (a form of skin cancer). Park’s legacy is continued by his son Jon Jon Park, a personal trainer and former Olympic swimmer. Reg Park raised and trained Jon Jon in South Africa. Today Jon Jon Park is the owner of the Legacy Gym, a popular gymnasium in West Los Angeles, CA. Reg’s daughter, Jeunesse, runs the Reg Park Legacy Foundation which helps disadvantaged people access sport and fitness.

Famous for his mass and strength, Reg Park was an early influence and lifelong mentor to champion bodybuilder and former Governor of California Arnold Schwarzenegger. Schwarzenegger said that he was inspired to become a bodybuilder after seeing Reg Park. Bonus footage from the DVD release of the classic documentary film Pumping Iron (1977) features Park mentoring Schwarzenegger. Park can also be heard performing the Master of Ceremonies duties in the Mr. Universe and Mr. Olympia contests featured in the film proper.