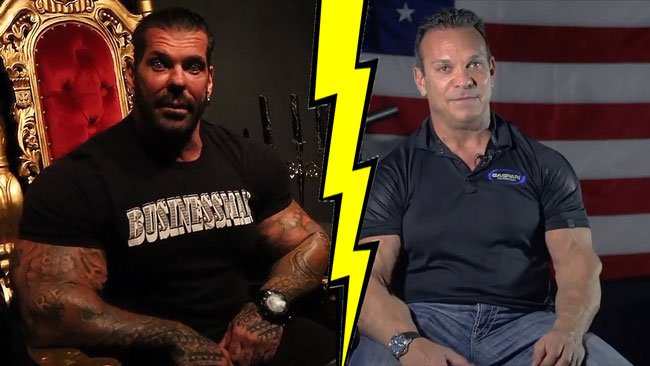 Rich Piana’s family are furious at the latest events by the company he created himself, 5% Nutrition.

Rich Piana passed away suddenly just over three years ago.

5% Nutrition still have control over Rich Piana’s official YouTube page that enjoys a following of over 1.2 million subscribers.

The company 5% Nutrition have continued to use the images and footage of Rich Piana since his death in August 2017.

Until a few days ago, Rich Piana’s family have been quiet about all the legal matters related to Piana’s former company.

The situation changed on 14 July, 2020 when 5% Nutrition uploaded a old video that has Rich Piana venting his frustration against legendary bodybuilder Rich Gaspari.

Rich Piana was speaking about some comments Rich Gaspari made about Rich Piana being a bad influence to the younger athletes.

“I’m not a fan of Rich Piana because I think he sends out a wrong message to the young millennial’s,”Gaspari said in the movie. “There’s a person I feel hurts the industry because they show the taboo part of taking the drugs, but then they’re there selling their products, touting that their products work when others don’t.” – Rich Gaspari

The video has Rich Piana accusing Gaspari Nutrition of having fake products. Piana explains briefly that Gaspari’s company lied to their clients.

Immediately after the video was published, Rich Piana’s mother Christine reached out to RXMuscle’s Dave Polumbo.

Rich Piana’s mother and brother Ryan are furious with 5% Nutrition with publishing this video and trying to start unwanted controversy.

“Due to legal reasons and the current investigation surrounding my son’s death I am limited as to what I can comment on at this time,” Piana’s mom Christine said.

“However, this latest video uploaded on my son’s personal Utube channel was the last straw for my family. I am speaking out for my family, Rich, his legacy, and for his beloved fans. First and foremost my family and I do not have any part in 5% Nutrition and since Rich’s passing, we do not support nor condone the company nor their practices in controlling 5% Nutrition and my son’s personal Utube channel.

5% Nutrition was created by Rich and in our eyes it was his dream which should have been laid to rest with him. My family and I have been trying to overcome the grief of losing Rich.

No mercy as 5% Nutrition has continued to milk my son’s name, and image for monetary gain. Splicing old videos to create new ones for more YouTube money. Trying to replace Rich with various athletes which never worked. It was appalling watching this latest video. The comments below the video indicate Rich’s fans do not appreciate this content either Fans are not fooled by the uncaring and despicable greed.

Worse yet this video does Rich such injustice by the very company he created. Sickening.In closing, I would like to thank Rich’s fans for standing up to the greed. Rich’s fans meant the world to him. We Thank You for your love and loyalty. Last but not least we thank Dave Palumbo for his support and giving us a platform.”

Rich Piana’s brother Ryan also had some words to say about the situation:

I do appreciate this video because it does ask a very vaid question. Who is running my brother’s YouTube channel?

I assure you it is not his family. We are broken and have been persecuted on social media for almost 3 years. The only thing we are striving for is Rich’s cause of death as we don’t have the answers.

As for Chanel’s comment she left on this video, we have documentation. Documents don’t lie, only people doe. Hope you find both statements satisfactory. Awaiting your response and confirmation… Thanks.

Chanel was with Rich the day he collapsed and eventually passed away.

After the video was published earlier this week, Chanel released her own statement insisting she has no connection with Rich Piana’s former company 5% Nutrition, contrary to what his brother insists.

“Please Pay Attention People! I have No control over anything related to Rich or 5%. I have not been a part of 5% since October of 2017. I have never had control over 5%, Rich’s YouTube channel, money or belongings.

I repeatedly have stated I got nothing from Rich or 5% when he passed away – that’s how we wanted things. So please realize I have no control over anything related to Rich or 5%. It’s all in the hands of the owners of 5%. Got a problem with what they’re posting or how shit is being handled? Harass then… not me.” 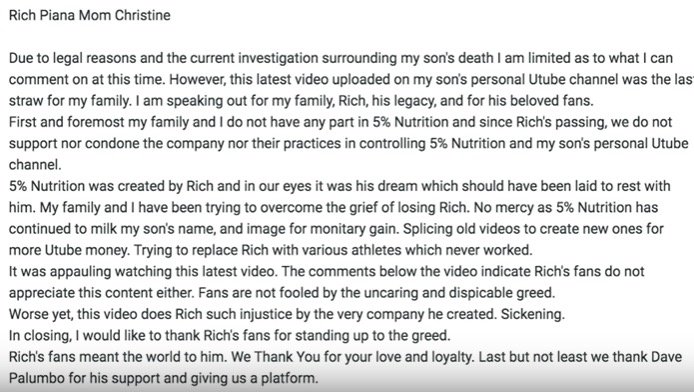 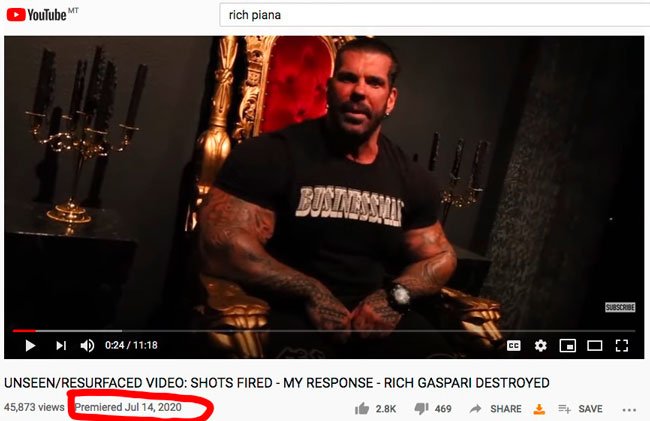