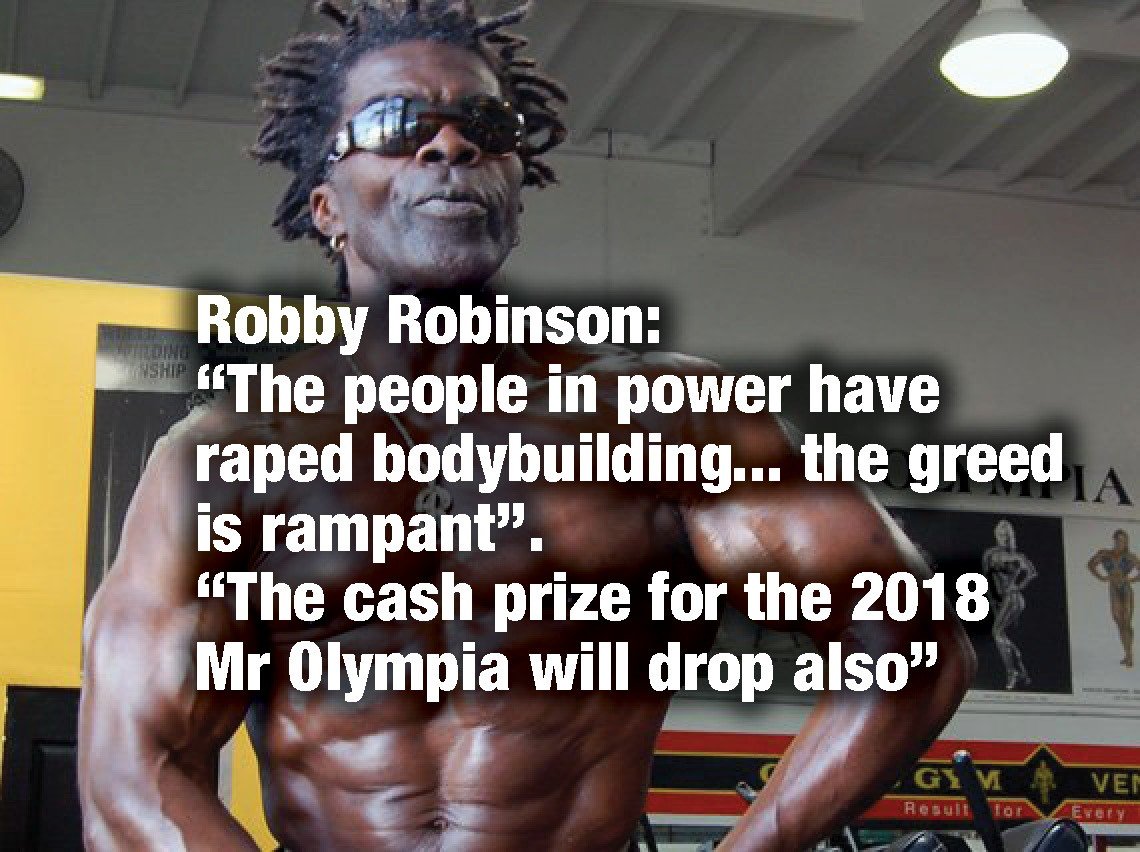 Bodybuilding legend Robby Robinson has always been very vocal on his opinion regarding the state of bodybuilding in the modern era compared to the golden era.

Other legends have also been vocal about the sport such as Mr. Olympia Samir Bannout.

In a recent post on his official Facebook page, Robby Robinson had some hard words to say directed mainly to the IFBB Pro League.

These are the comments of Robby word for word:

‘‘THE END OF BODYBUILDING”

I LOVE BBING. BUT IT IS LIKE A WILD ANIMAL IT IS BEEN SLOWLY ELIMINATED. THE PEOPLE OF POWER THAT HAVE HAD THEIR HANDS ON THE POWER CONTROLS FOR YEARS… .. HAVE RAPED, AND USE IT TO NO END. $$$$$$$$$$$$. THE GREED RAN RAMPANT.. LESS BOOTHS WERE SOLD AT THE ARNOLD CLASSIC THIS YEAR. THE CASH PRIZE WAS LESS. . THE CASH PRIZE FOR THE BIG O 2018, WILL DROP MONEY ALSO.. . NOW NOBODY WANTS TO HAVE ANYTHING TO DO WITH BBING ANYMORE.  I RECEIVED A LETTER MAKING CLAIMS NOBODY WANTS TO SEE A MUSCULAR SHAPELY PHYSIQUES. I DON’T BELIEVE THAT. BUT THATS THE WORD STRAIGHT FROM THE TOP OF THE HILL. RR 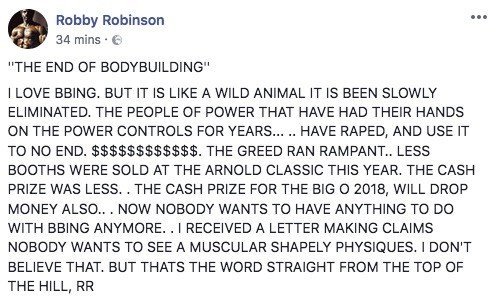 When you read this post, you can see the stand that Robby is taking against some of the people that run the shows. He is pointing the figure to people that run the industry, and as it looks towards the competitions run under the IFBB Pro League such as the Mr. Olympia and the Arnold Classic.

Robby believes that the people that run the shows have ‘raped’ and ‘used it’ to no end to make money.

Pointing out that less cash money for the 2018 Arnold Classic Ohio was given out and he is also implying that the 2018 Mr. Olympia will have a less money for the winners. To continue with Robby’s statements, no prize money has been mentioned yet with less than 16-weeks to the 2018 Mr. Olympia. Another point that Robby did not mention is if Dwayne ‘The Rock’ Johnson will be involved again in 2018 with his production company.

Robby has stated that he has received a letter stating that the fans do not want to see the hardcore bodybuilders anymore. Robby stated that he does not believe this, but he is saying this is coming from the top of the hill.

The big question is who is the person that sent him this email? We have contacted various sources to find out where this letter has come from.

Robby: I RECEIVED THE LETTER YESTERDAY. THE NEW IFBB IS PROMOTING ONLY CLASSIC PHYSIQUES THAT IS THE NEW BODYBUILDING.

Evolutionofbodybuilding.net has been following very closely the various changes in bodybuilding especially since the split between the IFBB International and the NPC/IFBB Pro League.

The IFBB International and the IFBB Elite Pro League in no way want to eliminate bodybuilding. What they do want is to eliminate the physiques with very large mid-sections and physiques that destroy the classic look of a bodybuilder. Physiques that make no sense aesthetically have no place in this sport.

The IFBB want to bring the classic look back to bodybuilding, the look that was loved form the 70’2 to the 90’s. Physiques with perfect lines, fantastic mid-sections and great condition. This will most probably mean that the hardcore bodybuilder with the IFBB and the IFBB Elite Pro League might look a bit smaller bit they will have much more pleasing and aesthetic physiques.

Yes, it is true, Bikini and Men’s Physique classes have become very popular, but bodybuilding is till alive and well as it is represented at all of the IFBB and IFBB Elite Pro shows.

We are seeing a trend in other federations that to defeat the reigning champion you must get bigger, and unfortunately some judges are awarding athletes for this. Doing this destroys the sport and it is discouraging the fans. This is why Classic Physique and Classic Bodybuilding is starting to get a better following. As well a number of open class competitors are going down to the Classic Physique class as we recently witnessed at the IFBB Pro League’s New York Pro with Regan Grimes competing in Classic Physique.

Continuing with the comments from Robby Robinson, he was asked about the 2018 New York Pro, and his answer was very shocking: 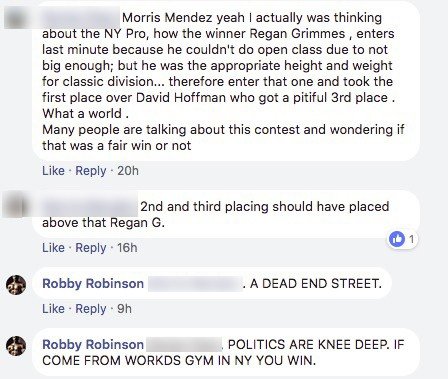 Robby basically is saying that if you don’t train in New York’s various gyms, you have no chance of winning. This surely cannot be said for the open bodybuilding results as Nathan De Asha from the UK won the show, edging past New York’s Juan Morel.

What as well must be noted is that the show in New York is organized by IFBB Head Judge Steve Weinberger. Steve and his wife Bev Francis run the Bev Francis Powerhouse gym in New York, and it is a known fact that a number of competitors that train out of that gym compete at the New York Pro. This could be what Robby is referring to. But again, Juan Morel who is a regular at Steve’s gym in New York was defeated by Nathan who is from the UK.

Robby also stated that officials do not care about the health of the athletes, all they care about is the money. In these statements, it could be that Robby is referring to a certain event that happened in recent years, but to be fair, this would be out of the officials hands. It is the top obligation of any official/promoter to stop a athlete from competing if they are not in good health and get them medical supervision. 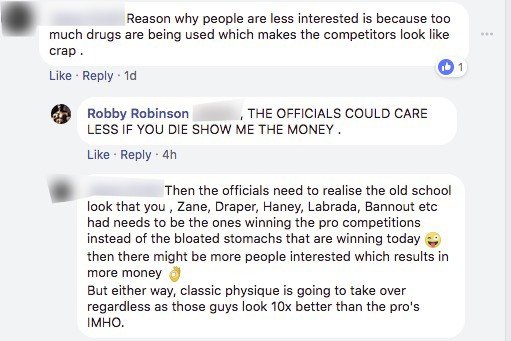 To conclude, within such a short post, Robby has revealed a number of controversial facts that is taking place in bodybuilding, mostly aimed at the IFBB Pro League. Will the IFBB Pro League answer to this? For this we have to wait and see.

We will keep you updated on any new details related to this story.