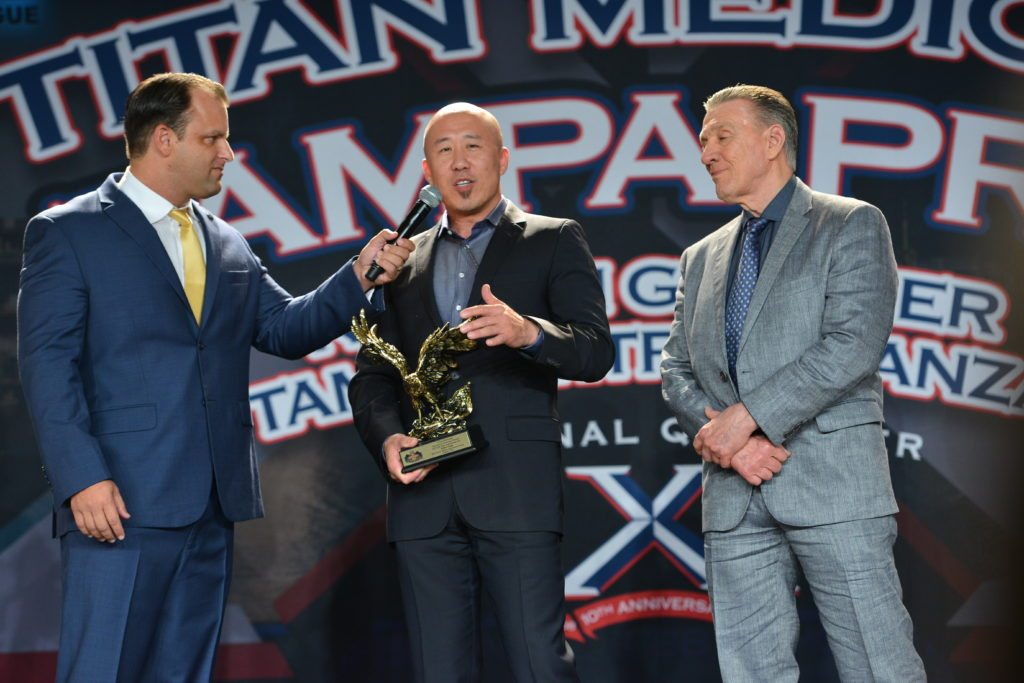 The Ben Weider Award, commissioned personally by Mr. Weider only a few months prior to his passing in 2008, recognizes men and women who have dedicated their lives to elevating the sport of bodybuilding. Now in its 10th year, the list of prior recipients includes Rich Gaspari, Lee Haney, Chris Dickerson, Lee Labrada, Lenda Muray, Corey Everson, Dexter Jackson, Vince Taylor and Peter McGough.

With his hard work and dedication, the Olympia Weekend has become a huge success and is growing each year. In fact, Dwayne “The Rock” Johnson will be working together with Robin Chang for the 2017 Olympia Weekend.

After receiving the award, Robin Chang left a long message on his Facebook page, thanking the people that took part and as well all bodybuilding and fitness fans.

Robin as well explained in detail the early days when he used to work with Ben Weider promoting and organizing the Olympia Weekend.

We at evolutionofbodybuilding.net would like to congratulate Robin for this truly deserved award.

This is Robin’s message in full:

Had an amazing weekend at the Tampa Pro. Special thanks to Tim Gardner and his amazing team for another GREAT weekend. He’s one of the best promoters in our business. Dan Solomon for his friendship and continued support of the Olympia. Rob Wilkins for continuing Ben’s dreams. Of course, without the support of Mr. David Pecker, President, and CEO of American Media, the Olympia wouldn’t be what it is today. Special thanks to Mr. Jim Manion, a friend, mentor, and our leader…thank you for always being there for me personally and professionally. And an extra special thank you to my team back in LA/NY. Without their hard work and dedication, the Olympia really wouldn’t be where it is today.

Receiving the Ben Weider Lifetime Achievement Award was truly a humbling experience. We all know what Ben did for bodybuilding. His lifetime of dedication has made bodybuilding the sport it is today. Without him, there would be no global federation. Ben has touched more lives than he could have ever imagined.

Throughout the years, people who were lucky enough to know Ben can you tell you that he had a big, generous heart and an endless reserve of energy. I was one of those lucky enough to know him. All of the accomplishments aside, Ben holds a special place in my heart because he always took the time to make a connection with the people he met. And many years ago, he took the time to make a connection with a guy who was taking over the biggest event in the sport. This is what I want to share with you…

It was my second time at bat producing the Olympia. My team and I were dealing with some major issues when I received a call from Ben. He was just checking in to see how things were going. He could tell I was distracted and frustrated with whatever I was dealing with, so he suggested I take a break and get something to eat. I told Ben I wish I could, but I need to solve this problem. In his calm and soothing voice, Ben said: “bring your phone and let’s take a walk to the arena.”

On the walk, Ben asked me to share how I got started in the sport. I told him I started working out in my best friend’s garage, which he nicknamed “The Pit!” We had photos of all the champions in a binder and would flip through them based on the body part we were training that particular day. After about a year of following Joe Weider’s Training Principles, we went to our first competition, Joe Weider’s Pro World Cup and became fascinated with this sport. We would call the stores every month to see if the latest issues of M&F and FLEX were on newsstands, and Gold’s Gym after each Olympia to get the results, yes, this was way before you could hop online for real-time results. Ben stopped me and said…When you get frustrated with work, think back to those days and remember how much you enjoyed the sport and how excited you were meeting the champions or attended an event. This is why we’re here…for those fans that can’t wait to come to the Olympia each year. For those competitors who inspire the rest of us to hit the gym and strive to be better than we were the day before. We’re here to give back and bring joy to fans around the world. Not everyone is going to agree with you or understand what we do. We’re not perfect, so not everything we do will be perfect, but if we truly give our best, then things have a way of working themselves out.

At the end of the conversation; I realized I was inside the Arena. When I looked up, I saw our stage with the giant OLYMPIA letters perfectly lit and the Olympia theme song playing in the background; at that moment, I understood everything Ben said.

No one knows this, but every year since that conversation, before we open the doors to the public, I take the same path to the Arena by myself. I turn off my phone and walk with Ben to start the show. Thank you, Ben, we miss you…We will continue to do our best to make you proud.