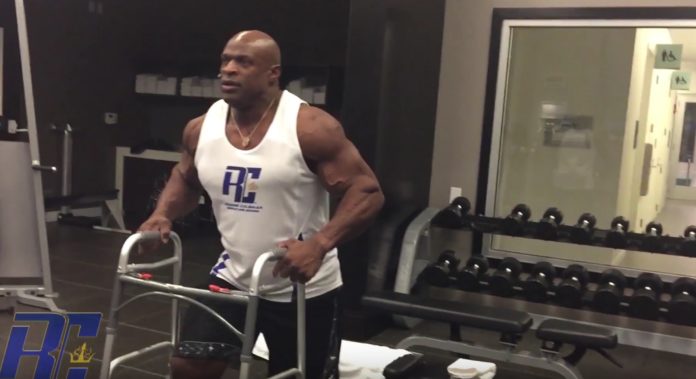 Is Ronnie Coleman to blame for his injuries?

In the few weeks, 8X Mr. Olympia Ronnie Coleman has been the subject of a number of discussions on a number of podcasts and social media.

Coleman revealed in a interview with Ron Harris of Muscular Development that he might never walk unassisted again after the surgeries he had.

In the interview, Ronnie made some controversial remarks about surgeons that operated on him.

Coleman said that the operations cost more than $2million and if the surgeons did the job right, he would have probably been walking for a long time.

While Ronnie is saying all this, the bodybuilding and fitness world have been debating if he is to blame for all his injuries and as well re-injuring him self.

After every operation that Ronnie had, he would eventually be back at the gym trying to get back into shape.

While a normal person would be worried about therapy and hopefully never having another operation, Ronnie would just continue his regular life as if he never had an injury.

As the operations started to get more serious and the outcome even worse, Ronnie would sometimes have to have up to six months of therapy to get the use of his legs and out of the wheelchair.

After all this, the minute Ronnie could walk with crutches, he would be back in the gym.

The hardcore training was obviously the reason he is an 8X Mr. Olympia winner. Ronnie also admits that he pushed the limits while he trained at his prime, but all this is also a factor in what he is going through today.

The moment Ronnie retired from the sport of bodybuilding and started noticing his serious injuries, it was at that moment he should have stepped away from the gym.

Ronnie also publicly said that he broke some of the screws that were inserted in his back. Some say they broke immediately after surgery and others say it happened at the gym while he was training.

IFBB Hall of Famer Shawn Ray believes Ronnie should of stepped away from the gym a long time ago and concentrated on his family and also his successful business ventures in a recent interview with Dave Palumbo on RXmuscle.com.

Shawn said that some of the injuries that Ronnie has are battle scars from dominating the sport, but his recent problems are basically his fault.

Shawn also made another important point regarding the medication Coleman is taking to relieve some of the pain. Shawn said that these are very powerful drugs and in the long term they will most definitely have a negative effect on his body.

Is Ronnie to blame for his recent recurring injuries? Most probably yes.

Ronnie has said if he had to do it all over again he would do the exact same thing.

Seeing this legendary bodybuilder go through all this pain and suffering is not easy. This is not what the sport is about.

The sport of bodybuilding is an extreme sport, but the health aspect has to be respected as well. A majority of athletes do push the limit to give them the opportunity to win the top prize, but when a person literally crushes his back to get to this point, it becomes pointless.

Many pro bodybuilders entered the sport and exited in good health and continued to be successful. Some other athletes including Olympia winners sustained some injuries that put them out of the sport. These athletes listened to their bodies and a majority of them continued to live a healthy life through fitness other than hardcore bodybuilding.

Ronnie has nothing to prove to anybody. What he did in his career will probably never be matched. Ronnie and Lee Haney are the only two that have won eight consecutive Olympia titles. The two have lead two completely different lives after their retirement.

Hopefully Ronnie changes his mentality and just concentrates on walking again with methods other than hardcore training.