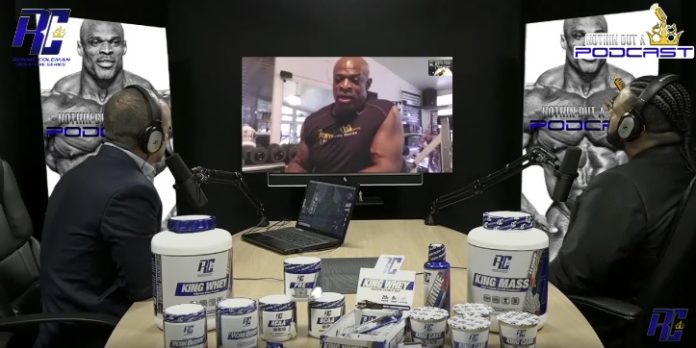 In the world of bodybuilding, there is no bigger name than eight-time Mr. Olympia Ronnie Coleman. Despite being retired from competitive bodybuilding for over a decade his popularity has never been higher. Just look at his social media numbers: 3.3 million followers on Instagram, 1.2 million on Facebook, 660 thousand subscribers on YouTube and another 246 thousand on Twitter.

To capitalize on these large numbers of followers and at the request of his fans, Ronnie has launched a podcast on his YouTube channel, RCSSTV, in partnership with Giles Thomas from the Pumped Media Studios. The name “Nothing But A Podcast” is a spin-off from Ronnie’s famous phrase, “Nothin’ but a peanut,” used to make heavy feats in the gym seem like peanuts. Ronnie will be discussing anything and everything from becoming Mr. Olympia, his craziest stories as a police officer, his childhood, catchphrases in the gym to his leap into the supplement industry with his own brand.

Ronnie launched his supplement company in late 2011 and has been growing it both domestically and internationally ever since. With flagship products like the “Yeah Buddy” pre-workout powder and “King Whey” protein powder and bar, Ronnie’s supplements have become a household name among the fitness community.

When asked about the success of his brand, Ronnie Coleman Signature Series, Ronnie replied, “I really just wanted to create a brand of supplements that people could trust and believe in. That’s why I put my name on the label and why I own the company rather than just simply licensing my name out like others have done in the past. You lose control that way.”

With innovation as a large part of the company’s foundation, Ronnie and team have recently launched some unique products. Ronnie Coleman Signature Series released “King Cake,” a high-protein microwaveable cake snack. With 19 grams of protein from whey and under 300 calories, this snack can help with those sweet cravings and is ready in under 90 seconds. How does it taste?  Well, the first shipment to their warehouse sold out in just 48 hours. It’s available in chocolate brownie and peanut butter chocolate.

Trying to really step outside of the box, Ronnie Coleman Signature Series has been developing food seasonings and toppers aptly named “Flavor King.”  These will help those focused on clean eating turn rather boring food into meals that they actually look forward to eating. They are currently planning on releasing two seasonings, one meant for meat and one meant for carbs, as well as a dessert topper that can be sprinkled on protein shakes or even oatmeal to give it a sweet kick that most crave while dieting.

“I’ve eaten more bland and boring foods than I care to remember over my decades of bodybuilding because, well, that’s kind of what you have to do if you want to achieve a certain physique even if you aren’t doing bodybuilding. I was always looking for ways to add a little extra flavor to my chicken or rice and used plenty of tricks over the years to help make those meals enjoyable. Sticking to a diet is hard because diet food just isn’t that tasty. These seasonings will really help those who are working hard on their nutrition to stick to their plan while also enjoying the food they eat.”

Ronnie is also releasing some new supplements that are more traditional in the fitness industry. His millions of fans all over the world really seemed to have latched on to his famous catchphrases in the gym so he decided to name his new fat burner after possibly his most famous phrase, “Light Weight Baby!”  For those that aren’t familiar, Ronnie used to scream this in the gym before big lifts to get pumped up and to convince himself that the ridiculously heavy amount of weight he was about to lift was indeed actually ‘light.’ Based on his 800 lb squat and deadlift, it seems to have worked. The name makes sense here because the intention of the product is for weight loss but also because the phrase carries an inherent message of mind of matter motivation that really comes in handy when trying to shed some fat.

Ronnie will also be re-releasing a new version of “Amino-Tone”, his branched-chain amino acid product, that will now contain a full spectrum of all essential amino acids. The re-brand will be called “Amino-Tone EAA.”

As if he didn’t have enough going on Ronnie has also been working on a book that chronicles his unlikely journey from a poor kid in a small Louisiana town to bodybuilding royalty and worldwide fame. The book is titled “Yeah Buddy! My Incredible Story” and will be released on Sept. 12, 2019.