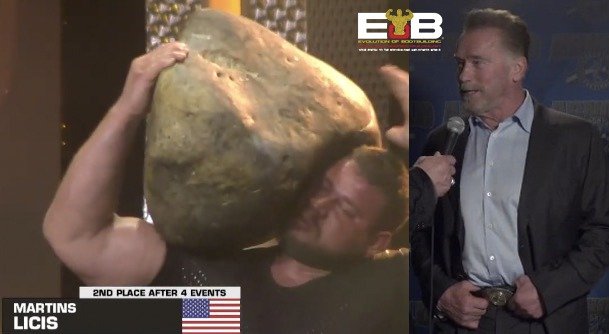 The excitement never stops when it comes to the bodybuilding and fitness world.

This time is was not on or off the bodybuilding stage, but it was during the Strongman event that was taking place at the 2019 Arnold Sports Festival.

This event was the rock lifting part of the Strongman series. The goal of the athlete is to lift a 410lb rock on their shoulder and place it down in a controlled form as many times possible in 2 minutes and 30 seconds. The judges have to decide if it was done properly.

This event took place on the main Arnold Classic stage in front of the man himself Arnold Schwarzenegger.

All was going well until Strongman Martins Licis had his try.

When Martins tried to put the 410lb rock down, it rolled of the stage and landed exactly in front of Schwarzenegger and the other guests.

If the rock continued to roll, it would of surely caused injury to the legendary bodybuilder and his friends.

Luckily, it stopped and was lifted back on the stage to continue the show.

After the event, Bob Cicherillo asked Arnold about the incident and he was in good spirits and said its all part of show business.

WATCH: Schwarzenegger almost gets crushed by 410lb stone at Strongman event from Evolution of Bodybuilding on Vimeo. 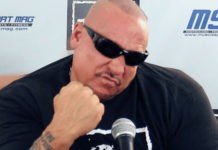