WATCH: Schwarzenegger gets kicked in back at Arnold Classic Africa.

Evolutionofbodybuilding.net has just been informed that Arnold Schwarzenegger was kicked in the back while attending his own Arnold Classic in Africa.

The former Governor of California was attending the sporting event Arnold Classic Africa when a person kicked him in the back.

Schwarzenegger was at the Sandton Convention Centre in Johannesburg, South Africa, when the incident occurred.

Schwarzenegger was enjoying the event and taking photographs with fans and judging a skipping competition when a man jumped and kicked the 71-year-old.

The man was immediately detained and the bodybuilding legend looked to be ok.

The man who kicked Arnold continued yelling for help, it sounded like he was saying “Help I need another kidney or Lamborghini” while he was being escorted out of the event.

Arnold Schwarzenegger did not look to have any injuries at the time.

Arnold commented about the incident immediately after on his official Twitter page.

He said: “Thanks for your concerns, but there is nothing to worry about. I thought I was just jostled by the crowd, which happens a lot.

“I only realized I was kicked when I saw the video like all of you. I’m just glad the idiot didn’t interrupt my Snapchat.”

Afterwards Arnold continued to enjoy the activities and meet with the fans.

This will surely not damper such a great sport festival.

We will keep all our readers updated on this incident as the news comes in. 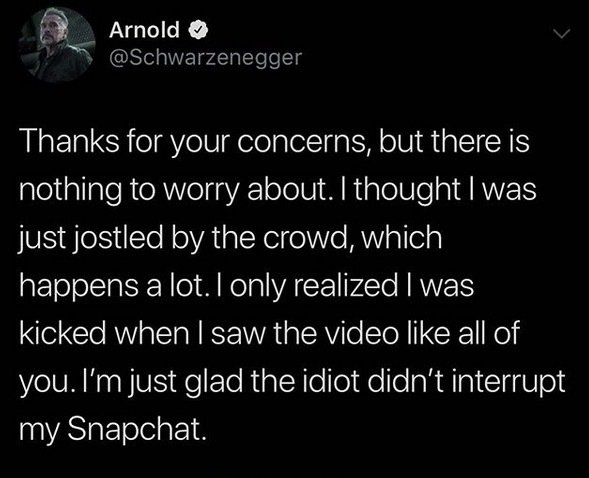