Keone Pearson qualified for the 2020 Olympia Weekend and was a favorite to win the title, but he decided to skip the event due to personal reasons.

If Keone qualifies for the 2021 Olympia Weekend, he will be singled out as one of the main contenders to challenge Shaun for the title.

Shaun Clarida has already started to prepare to defend his title at the 2021 Olympia Weekend. A number of athletes will be waiting for the opportunity to dethrone him, but if Shaun improves his physique from 2020, he will be hard to beat.

Having the opportunity to watch two of bodybuilding’s biggest stars training together is a treat, especially during this Covid-19 pandemic.

What is great about Shaun and Keone is that these two athletes will definitely go up against each other on stage, most probably at the 2021 Olympia Weekend.

Along with the video, a detailed explanation was given about the great relationship these two athletes have:

There’s no beef. No animosity.

Contrary to what the internet will undoubtedly brew up, there will never be beef between true competitors and real professionals in this sport.

“We aren’t UFC fighters. I am not trying to knock him out. We both come in here and do our thing and want to be the best.”

212 Mr. Olympia Shaun Clarida and Keone Pearson both arrives in Texas and hauled ass to Destination to link up for a chest and shoulders workout on a crazy packed and epic week of team building and training. Deep in the offseason, Shaun is preparing to defend his title and every Tom Dick and Harry is coming after him… including Keone.

“I have been following Shaun’s career since I got into bodybuilding and have been wanting to train with him for a while.”

Shaun and Keone are kicking off a great week and will be linking up with the likes of Branch Warren, Johnnie Jackson, Brett Wilkin Ben Chow, Ivana Wilkin, Olivia Gravengaard, Christina Heath, Joe Mackey to all shoot some timeless photos with the one and only Per Bernal.

Stay tuned for more jam packed and LIT sessions with these ladies and gents. 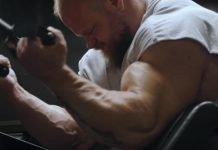 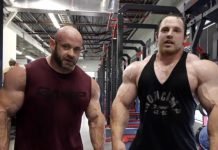