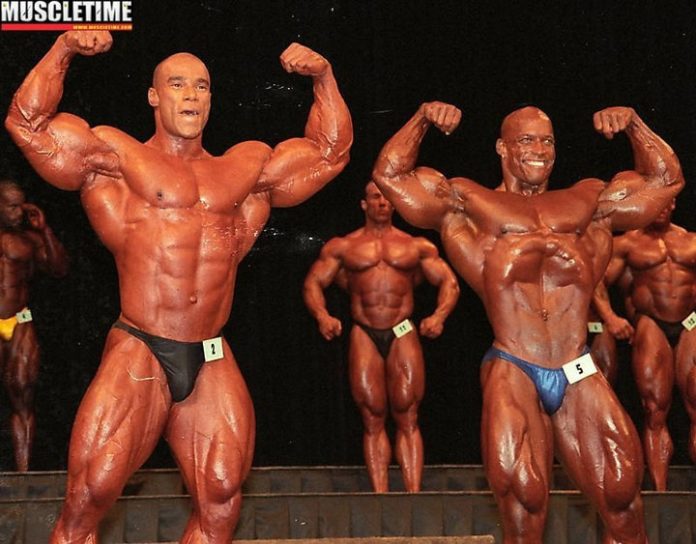 If you have not heard the news yet of Kevin Levrone’s comeback to the Olympia stage, you surely have been living under a rock.

The bodybuilding world has been buzzing with journalists, competitors and friends giving their opinion on Levrone’s comeback.

Shawn has competed with Levrone throughout his career and they had some great battles on stage together. From the stage the respect continued and together they toured the world organizing seminars and promoted the sport of bodybuilding ever since.

But things have changed drastically since the famous opinion of Shawn Ray was released last week, on Generation Iron. (WATCH: Shawn Ray speaks his mind on Levrone comeback)

Shawn Ray was asked to give his opinion on the matter. We all know Shawn says it as it is. Even when he was at the top of his game, Shawn would criticize the way shows were judged and the way the IFBB handled some matters.

Shawn cut no corners and made a lot of valid comments. Shawn made it a point to say he will support Kevin, but at the same time, he was very critical on certain matters regarding health and other aspects of getting back into such a hard sport at the age of 52.

It seems that this did not go down well with Kevin, according to Shawn Ray. It appears that Kevin has brushed Shawn aside because of his comments, basically ending a 25 year friendship. Shawn believes that a real friend would respect your comments even if you do not agree with them.

Many of the present and retired bodybuilders all stayed on the safe path saying they are happy to see Kevin get back on the stage, but they never really expressed their opinion on how he would do as Shawn did.

Shawn Ray’s comments did not go down well with many in the bodybuilding world and it seemed as Shawn was all alone in this.

Today, Digital Muscle‘s Dan Solomon released a video blog going one step further. He basically said he is happy as well to see Kevin Levrone get back on stage, but at the same time said he has no chance against the top 15 bodybuilders in the world. Dan Solomon is one of the most respected people in the industry and his comments will surely not go down well with Levrone.

A photo with this article shows Shawn Ray, Chris Cormier and Kevin Levrone at the 2016 Levrone Pro Classic. I had the opportunity to spend a lot of time with the three of them and right away you will notice that they are really close friends. They would help each other out, joke around and just have a good time. When you talk to them they treat you as you have known them for years. This is not something you see everyday in this sport. And it would truly be a great loss to the sport if a friendship like this is broken just because a friend is looking out for the other.

Below are some comments taken from Shawn Ray’s personal Facebook page published with his permission.

The first quote below is a reaction from Shawn Ray after Dan Solomon posted his video blog telling people to ‘keep it real’.

Interesting view of what I previously stated about the “Comeback” of Hall of Fame Bodybuilder, Kevin Levrone who’s Officially on record as stating, “Shawn and I are no longer boys” as a result of my personal Opinion regarding his Return to the Mr Olympia Stage this September. I wonder how many more friends Kevin will dismiss because they don’t agree or think he has a competitive shot at placing Top 5 or even Top 10 for that matter “If” he makes to the contest stage?
Dumping friends who don’t Agree with you is a fast track to a miserable existence when Reality hits you. I’m personally happy that Kevin found something that gives his life meaning but I cannot Professionally Agree with his delusion that his Passion or Efforts will result in Victory in the Biggest Show on the Planet!! So with that, I’ll Publicly state that I’ll respect Kevin’s decision to dump our friendship of 25 years on the basis of me not being a “Fan” instead of a Friend with an Honest Opinion. If one cannot be entitled to his own opinion then we were never really friends to begin with and now it may appear based on the opinion of mutual friend and Bodybuilding Media Voice, Dan Solomon that Kevin will lose another Friend who doesn’t Agree with him today.
When all is said and done, besides Family all you have are your Friends.
If you can afford to dump them based on not “agreeing” with them then you never needed them in the first place.
I place a high premium on Friendship and personally want to Thank those who have an Opinion and share them with me.
Iron sharpens Iron – Shawn Ray


I’ve seen 1st hand the “Beauty & Success” Professional Bodybuilding has on the lives of icons, mentors, friends & legends of this sport like; Arnold, Lou, Haney, Yates, Labrada, Levrone & I.
That said I’ve also witnessed the unforgiving brutality and carnage this profession has had on people I knew and respected with respect to Muscle Tears, Injuries and Death like; Don Youngblood, Nasser, Momo, Hildebrant, Duvall, DeRazzo, Atwood, Kovaks, Wood and others too young and visibly Healthy to no longer be here with us. As well, others have development issues with Kidneys like, Long, Wheeler, Prince and others with muscle tears like; Gaspari, DeMey, Freeman, Yates & Coleman and yes we can include a young hungry Levrone in here at the beginning of his career 20 plus years ago!!!
That said, it’s hard to ignore these statistics with the best Doctors monitoring you at 51-52 years old simply to “Prove” something to yourself or fans for that matter when you have kids at home.
To each his own. Prayers may not be enough but they are all I have to offer at this time.
Me? I’d rather spend this time of my life watching my kids play, grow and learn from where I’ve been as well as not have to fear the eminent possibility of injury or death and the aftermath of my decision to compete. – Shawn Ray

Related news: Bodybuilding world have their say about Levrone’s comeback 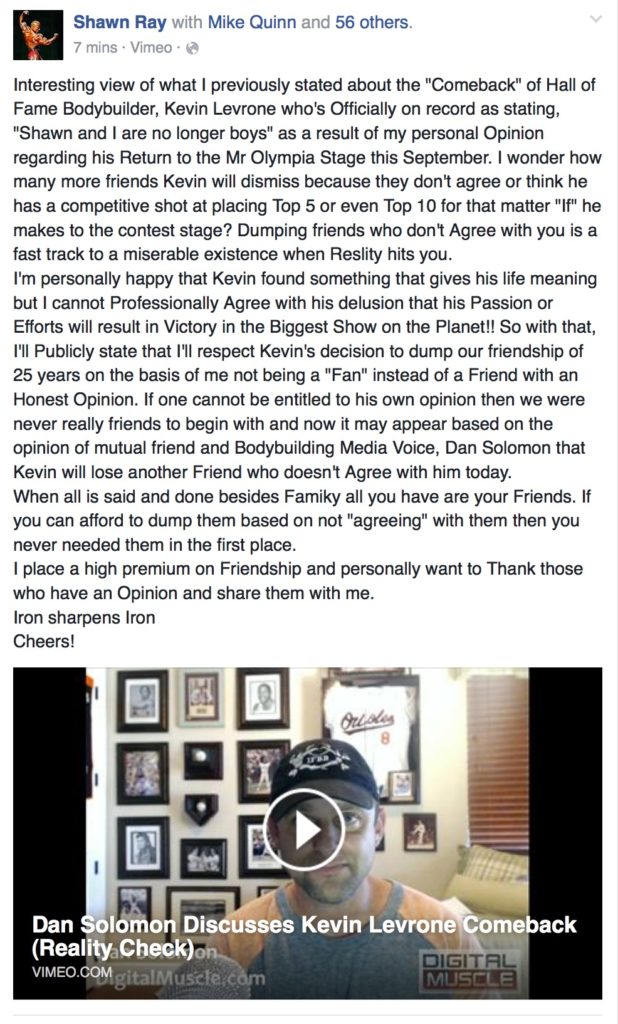 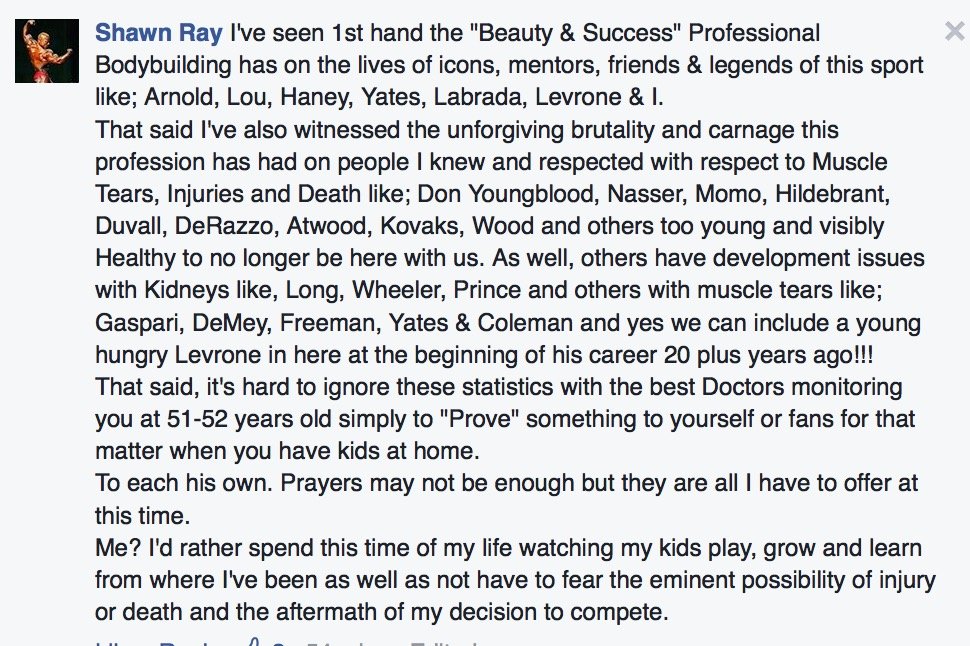