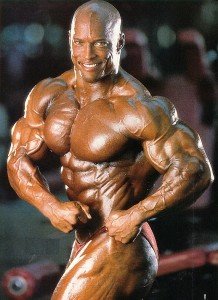 In 12 successive Mr. Olympia contests (1990-2001), Ray finished in the top five each year – a feat made all the more remarkable by the fact that his peers always outweighed him by 50 to 60 pounds.  Renowned for his symmetry, he was voted by FLEX readers in 2003 as the best bodybuilder never to win the Mr. Olympia.

Perhaps the only inductee this year to have his name grace two halls of fame, Shawn Irvin Ray began his love of the iron game during the summer before his junior year at Placentia, California’s El Dorado High School (where he is a member of its football hall of fame).  During his first day at a local gym, he met and gained instruction from John Brown, who was beginning his own IFBB career at the time.  Ray began visualizing the body parts of famous bodybuilders while training those same parts – imagining the biceps of one man, the chest of another and son on, trying to equal or surpass those developments. 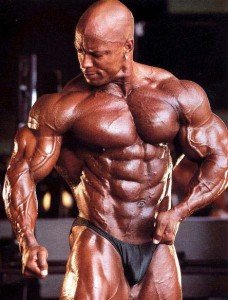 While visiting Esperanza High School during his senior year, he entered a powerlifting contest on a whim and ended up winning the 185-pound class with a total of 1,295 pounds.

Ray began his competitive bodybuilding career in 1983, placing second in the short class at the Orange Coast Classic in Newport Beach, California, and then winning the California Gold Cup.  The next year, while still a senior in high school, Ray won the Teen Mr. California, and was able to meet 2005 Hall of Fame inductee Mike Christian, who offered the young bodybuilder training advice.  In June 1985, Ray won the Teen Nationals and the IFBB Jr. World contest.

While building his physique, Ray continued to build his mind, by putting in two years at Fullerton Junior College, a semester at San Antonio College and a year and a half at California State University, Fullerton, where he studied social psychology – useful vocation when fielding Internet barrages from some of bodybuilding’s toughest fans. 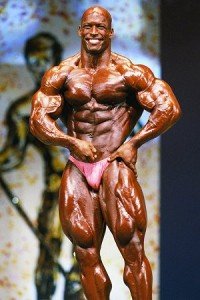 Ray earned passage into the IFBB after winning the 1987 NPC Nationals.  His pro debut came a mere seven months later – the IFBB Night of Champions, where h placed fourth.  A 13th-place finish in his first Mr. Olympia in 1988 played a role in his decision to sit out the 1989 competition schedule to prepare for the 1990 Ironman Pro, the Arnold Schwarzenegger Classic and the Mr. Olympia.  (He won two: the Ironman and the Arnold.)  Excluding his rookie-year attempt at the O, his other 12 entries have averaged a placing of 3.7.

Since stepping onstage as a competitor for the last time in 2001, Ray, who converted to Christianity the same year, is still very much in the public eye.  Ray Street in Placentia is named after him, and in 1994 and 2006, he was Grand Marshall of the Placentia Heritage Day Parade.  He is employed as a spokesman and marketing director for Vyotech, and successfully promoted the first Shawn Ray Colorado Pro Classic in 2006.  He currently trains for fitness four days a week at an L.A. Fitness gym.

In 2005, Ray and his wife, Kristie, welcomed their daughter, Asia, into the world at St. Jude’s Hospital in Fullerton – the same hospital where Ray was born to Charles and Yvonne Ray 40 years earlier.  No decision yet on whether another seven children are planned to match the number of Shawn’s siblings.