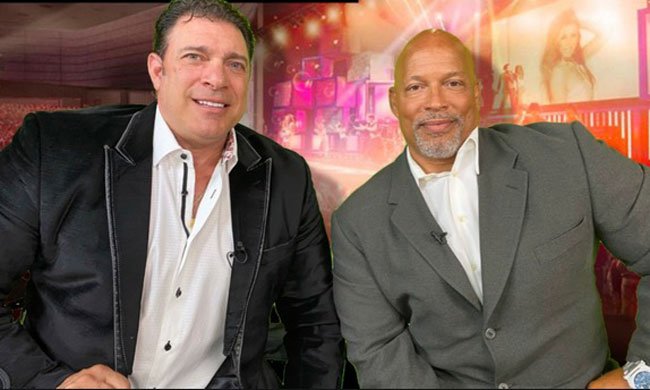 Just a few days ago, a petition was launched by a unidentified person against Shawn Ray.

This all started from a Youtube show hosted by IFBB Pro Fouad Abiad. The show in particular had 2020 New York Pro winner Iain Valliere as a gust.

On a number of occasions, Fouad and his guests, especially Iain, love to fire jabs at Shawn Ray in regards to his commentating on bodybuilding shows.

In one of the last shows of the season, Shawn Ray made a reference to a bodybuilders hair style and confused the name of a Canadian bodybuilder… big deal.

These small incidents sparked a debate on Fouad Abiad’s show and the comments against Shawn Ray started to get worse as the show went on.

The debate went so far as Fouad saying that he should get the job as a show commentator.

A few days after this episode was published, a unknown decided to create a petition titled “Stop Shawn Ray from commentating bodybuilding shows.”

Everybody has a right for their own opinion, but if you want to replace Shawn Ray or even Bob Cicherillo, you must be warned that you have very big shoes to fill.

Even Redcon1’s Aaron Singerman decided to have his say against Shawn Ray.

Iain Vallieri said “Shawn Ray is a out of touch, sexist, dickhead and knows nothing about the current climate of bodybuilding. Get his ass outttta here.”

David Bourlet shockingly said “Wow! Glad to know that it’s not just me who feels this way about Shawn. So Sad to be such a fan of someone for the athlete that they are, yet totally dislike them as a person. I guess shawn burned a lot of bridges over the years. I hope nobody will ever feel this way about me.”

Aaron Singerman proudly posted that he signed the petition.

There might have been other prominent figures with comments, but these three stood out.

Going back to Iain Vallieri, this is the same guy that was in tears after Milos Sarcev targeted him with some comments after his victory at the New York Pro.

It seems when comments are directed to Iain, he really does not like it.

To be fair, Iain is not a prominent name in the industry and just because he qualified for the 2020 Mr. Olympia, does not mean he is God’s gift to bodybuilding.

It will be very interesting to hear Shawn Ray’s opinion about Iain when he steps on the Mr. Olympia stage against the other stars.

Like or not, Iain and Fouad must accept that Shawn Ray competed during the best and most competitive era in the history of competitive bodybuilding. He obviously knows the sport inside and out.

Reading the comments from Jay TV’s Dave Bourlet was very shocking as well. Even if he does not agree with Shawn Ray, he should have held back from writing those comments about a fellow colleague.

What Aaron Singerman posted was expected, he could not accept Shawn Ray’s comments towards Dallas McCarver (RIP) when he was in horrible condition posing in front of Jim Manion. Even when Shawn criticized Dallas on other occasions, Aaron went so far to ask Shawn to get fired from his previous job.

Shawn Ray’s knowledge of the sport

Shawn Ray was one of the best bodybuilders to grace the stage and after retiring, he turned his focus to commentating and increasing his knowledge about the history of the sport.

It is true, when commentating at a event such as the Arnold Classic or the Mr. Olympia, you have to talk about the athletes that are standing in front of you. And the commentator has to be very fair and honest as possible.

Joe Weider even wanted Shawn Ray to be the next leader/spokesperson for the sport of bodybuilding. (Watch video at end of article).

Be sure that during the event, the commentator will have to talk about the history of the sport. Shawn Ray has no problem with that. What will the people that want his job do?

Listening to a number of wannabe’s shows, they are clueless when they go back just more than five years when discussing the history of the sport.

Shawn Ray has worked very close to Joe and Ben Weider, Arnold Schwarzenegger and other prominent figures in the sport. If Shawn Ray was not capable, these people would not want him by their side.

Fast forward to 2020, you will find Shawn Ray working for Olympia Weekend owner Jake Wood and holding the position of Editor in Chief of Digitalmuscle.com, as well owned by Jake Wood. On top of all this, Shawn Ray and Bob Cicherillo produce a great bodybuilding show called “Monday Night Muscle“.

When Shawn was working as an independent bodybuilding journalist, he would not hold back from reporting the news as it is. Sometimes it was harsh, but he was 99% correct.

Even when talking about his good friend Kevin Levrone, his comments about Kevin’s comeback were harsh, but after the smoke cleared, he was right.

Shawn has seen a large number of bodybuilders who thought they were invincible drop dead. His comments are sometimes harsh, but they can sometimes save a persons life if he or she listens.

Who is a good commentator?

The bodybuilding world has many people that sound fantastic behind a microphone, but that does not mean they are the right person for the job of being a bodybuilding commentator.

At the moment, Shawn Ray, Bob Cicherillo, John Hansen, Milos Sarcev, Samir Bannout, Dan Solomon and the legend Peter McGough are the only people that can sit in the hot seat of being a bodybuilding commentator.

If you want to talk about everything related to bodybuilding history, we must not forget Wayne DeMillia.

Regardless what you say on a podcast or in a useless petition, nobody else has the resume of the mentioned names.

Today’s athletes are too sensitive! They can’t handle the criticism. If a bodybuilder walks out on stage with a pink mohawk, the commentator has the right to say something.

Back in the day, the male bodybuilder would make sure every detail is taken care off. Everybody presented a clean cut physique from head to toe.

The job of the athlete was to make sure the judges focus on their physique and not their hair style.

If an athlete presented a suspicious body part, the commentator has every right to call him or her out. No need to cry about this.

The sport of bodybuilding can be a beautiful sport but at the same time it can be cruel. The athlete, especially the male athlete has to learn how to handle the criticism and not cry about it a few days later.

Fouad Abiad distances himself from petition against Shawn Ray

Immediately after the petition against Shawn Ray started making its rounds all over social media, Fouad Abiad published a video trying to explain himself.

Fouad immediately said that he has nothing to do with the petition and that he himself has already asked Dan Solomon if there is any chance of commenting on a show.

We can all believe that Fouad has nothing to do with the petition, but it started from comments coming out of his show.

Fouad’s popularity is increasing and he must control his guests from commenting in a certain way as a viewer might take it a step further as they have already did.

Now, even though Fouad admits he does not talk to Shawn Ray, the hate comments aimed at him are on the increase and unfortunately it has originated from his show.

Fouad’s message: “I’d just like to say thank you for anyone out there who thinks I would be good enough to commentate at the Olympia. That being said I don’t think attacking Shawn Ray with a petition is the way to go about it. It seems a little too much for me, we can disagree about styles but to actively petition/tag someone hundreds of times a day seems too negative for me.”

“Also, the Olympia and @dansolomon_official already know I’m interested in commentary. If there is a place for me they will consider me. I don’t think tagging them all day is helping anything, please don’t do this on my behalf. Lastly, to anyone who has started the petition or created polls, stories, etc and tagged myself, Shawn, Dan or the Olympia, if you’re doing it for me please delete these things. It’s not how I like to go about my business/work relationships. Thank you guys for understanding.”

The full video is at the end of the article.

Evolutionofbodybuilding.net will surely get a backlash from this article.

We stand by the famous quote “The truth hurts”. No other words can explain the sport of bodybuilding as perfect as that.

Anybody can say what they want behind a microphone, it gets interesting when they meet the person they talked negative about face to face.

I would love to see Iain with his head down when he walks by Shawn Ray at the 2020 Mr. Olympia.

The 2020 Olympia Weekend will be a interesting event, on and off the stage.

To conclude, we are happy just as things are with Shaw Ray and Bob Cicherillo behind the microphone.

Joe Weider explaining to Shawn Ray why he should be the next leader/spokesperson for the sport of bodybuilding. 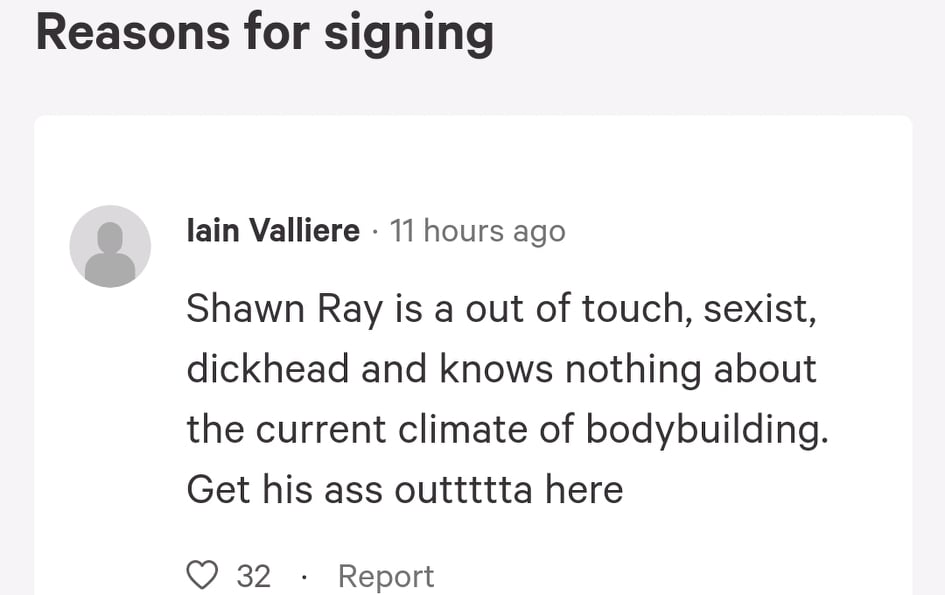 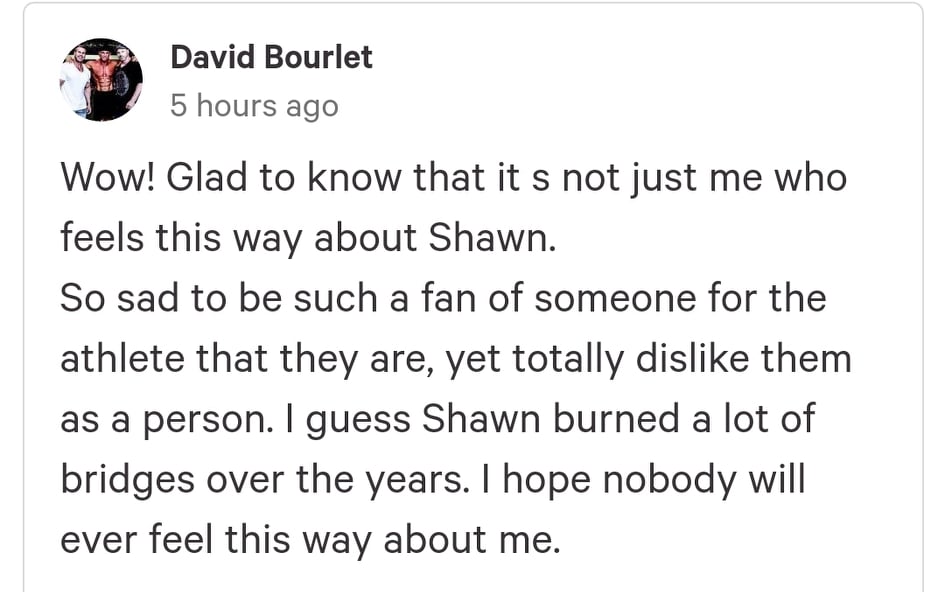 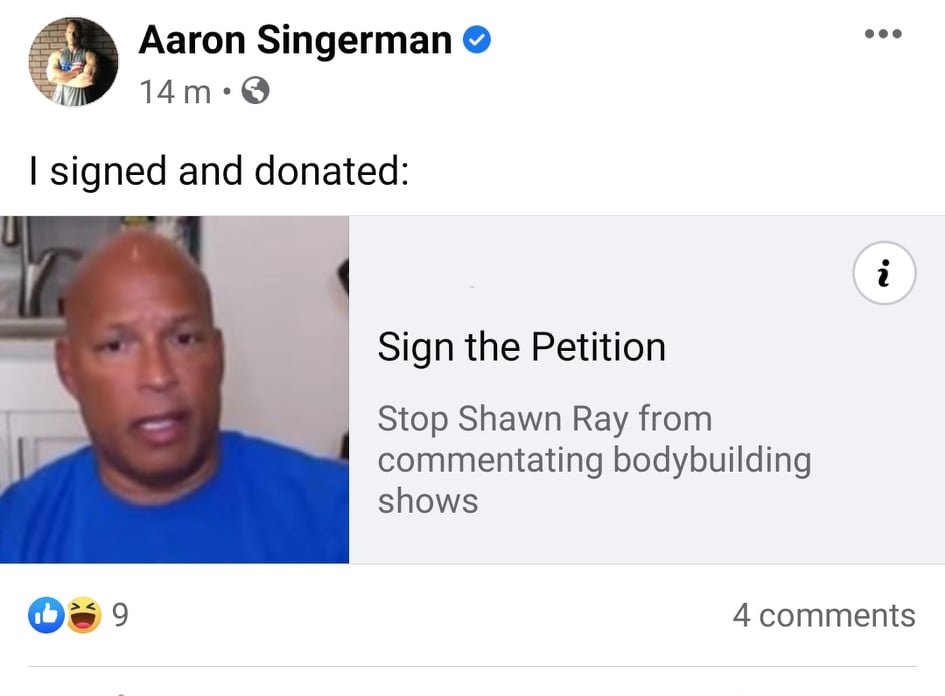