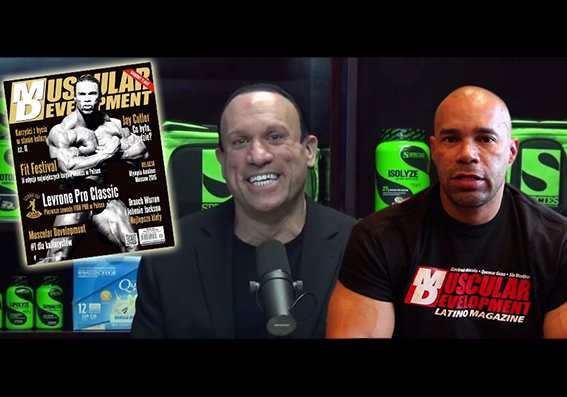 Yesterday evening an incident happened on live internet TV that sent some shock waves through the bodybuilding world.

Dave Palumbo has been promoting for the past couple of weeks that IFBB Legend Kevin Levrone would be a guest on his show for an interview.

Many thought he would be on the show, but Kevin did not show up!! Palumbo still went on with the show saying that Kevin told him just 30 minutes before that he would not be able to do the interview.

Dave Palumbo said on the show that the reason Kevin did not show up was because Muscular Development’s Steve Blechman stopped Kevin from doing the interview. And as well Dave said that Kevin told him Steve was paying him $4,000 a month.

Now if you have not been following this media circus, Dave Palumbo of RXMuscle.com was a former employee of Muscular Development and when he left he started his own website and since then, every moment he has a chance he will take a jab at MD. Sometimes they are a good laugh when watching the show.

Then the subject of the show turned to (according to Dave Palumbo and crew) the financial situation of MD. Was this relevant to what happened? I personally do not think so.

There is more to this then Dave thinks!! We have worked closely with Kevin and one thing is for sure is that he is a very loyal person. Ok, maybe this past month there was some clashes between him and his good friend Shawn Ray, but Shawn said what he had to say and Kevin surely still respects him.

Palumbo surely would have asked Kevin about Shawn Ray’s comments about his comeback. Was Kevin ready to talk about this with MD’s rivals? surely not. If Kevin wanted to go all out, he would of forgot about everything and did the interview.

Talking about loyalty. I had countless of conversations with Kevin on bodybuilding. His loyalty to the NPC and the IFBB is just incredible. The love he has for them and the appreciation for what they did for him is truly amazing. Kevin does not only say great things about the organization in front of the camera, but even to everybody he talks to. The same goes for Muscular Development, Kevin is very close to the company.

A number of pro athletes are tied down as well with contracts with MD and other magazines. If they were not, we would have more interviews on this site. That is the business of bodybuilding today as we know it and we just learned how to live with it.

Most probably, yes Steve Blechman did stop the interview, but Kevin most likely would have pulled out in the last minute anyways.

Kevin is not only close to MD USA and Steve Blechman, but we must not forget Kevin’s ties to MD Poland. Ted Zarebski is the CEO and Founder of FA (Fitness Authority) Nutrition, who are the distributors of a number of large brands of supplements including the Levrone Signature Series all over Europe. Zarebski and FA Nutrition are also the distributors/publishers for MD Poland. Also, Ted is the owner of PowerPit Gym in Gdansk Poland. A very popular gym that is used by a majority of IFBB Pro’s for training and photo sessions for Muscular Development Poland.


The Fit Festival in Poland that takes place every year and hosts the Levrone Pro Classic is also run by Ted Zarebski and crew.

Going to the gym, Ted makes sure everybody is welcomed with open arms and he will surely offer you a first class service.

100% support is given to Levrone by FA Nutrition and MD Poland for his show the Levrone Pro Classic and also in promoting his brand of supplements.

As well we all know Kevin travels to Poland frequently for business as we see in the videos he posts on his social media.

Now, would Kevin throw all this away to do an interview on RXMuscle.com?? It is highly unlikely. Kevin is very very loyal and as well the financial ramifications would be tremendous.

Dave has had some great interviews in the past, but this one unfortunately could not happen.

So all we can say is Dave Palumbo should have seen this coming and should of stayed away from this interview. Did Kevin really agree? most probably, but then he probably sat down and thought about it.

Also it could be that Dave and RXMuscle.com wanted to do this as they knew Kevin would pull out. With Kevin pulling out it would give them more of a reason to attack Steve Blechman.

This surely will not end here for RXMuscle.com as we have a good couple of weeks hearing about this from them!

Watching from the sidelines… we could be wrong, but there is no law stating that we cannot comment on all of this. Just as RXMuscle and other media outlets vent on certain issues. We respect both parties but when certain situations occur we cannot sit back and just watch.

As for Kevin levrone. All this is not needed as he has an Olympia contest to prepare for!!

Watch the video below to see what happened on RXMuscle.com as well the photos of some articles and cover feature of Levrone and his contest in MD Poland. Also the screenshot of the contact for MD Poland with the address of FA Nutrition.