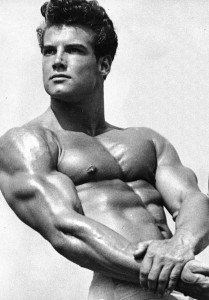 Almost without exception, all references to Steve Reeves append to him the phrases “V taper” and “flawless symmetry”. Those attributes took him to victory at the 1947 AAU Mr. America, 1948 Mr. World, and the first NABBA Mr. Universe in 1950.

Reeves’ matinee-idol looks and physique qualities led him into the movies; audiences were able to enjoy Reeves in the Italian-produced series of Hercules films made in the late ‘50s and early ‘60s. In those roles, he was the Arnold Schwarzenegger of his era, the most visible and best-known bodybuilder in the world; in fact, Reeves’ Hercules films served as an inspiration to the young Arnold.

Never really known as a gym rat, Steve’s personal philosophy was to train hard, then forget training and be a normal person who happened to have the adjunct of muscle. Nearly 50 years after he last competed, Steve Reeves is a bodybuilding icon whose physique is always presented as “Exhibit A” in any bodybuilding debate concerning aesthetics versus mass. Steve lived on his ranch in Valley Center, California, for many years and passed away on May 1, 2000.

Without a doubt, his legacy lives on in the countless legions of admirers who were inexorably drawn to a healthy and fit lifestyle because of their hero – the only true Hercules. 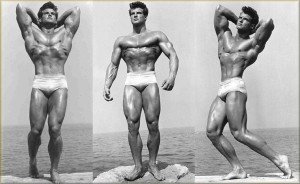