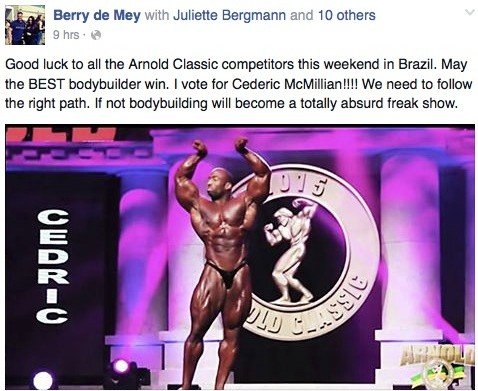 The messages and opinions keep coming up on social media from the greatest bodybuilders that ever graced the IFBB stage.

First it was Arnold Schwarzenegger who criticized the judging at the 2015 Arnold Classic when Cederic McMillan placed fourth.

Arnold emphasized the Cederic has the ideal physique in bodybuilding and he is being overlooked.

Since then, a number of discussions and opinions have taken place on all the best websites and radio shows related to bodybuilding.

Evolutionofbodybuilding.net has been preaching about the way competitors are being judged and what is the ideal look for a professional bodybuilders from the birth of the website.

Now, a day before the 2015 Arnold Classic in Brazil, legendary bodybuilder Berry de Mey put up a post on Facebook declaring that he will be supporting Cederic McMillan, not only because he is a great bodybuilder, but bodybuilding has to follow the right path as it will become a freak show!!

This is the message in full:

Good luck to all the Arnold Classic competitors this weekend in Brazil. May the BEST bodybuilder win. I vote for Cederic McMillian!!!! We need to follow the right path. If not bodybuilding will become a totally absurd freak show.